January 2009: New team elected to lead Alliance Party in North Down during 2009 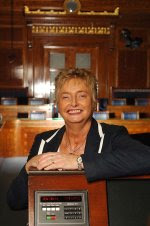 The Alliance Party in North Down recently held their Annual General Meeting in Bangor on Wednesday 28 January 2009.

Outgoing office bearers were given an opportunity to address the meeting before the election of a new Executive Committee. The meeting was then concluded by Eileen Bell CBE who provided an interesting insight into her time as Speaker of the Transitional NI Assembly.

North Down Association Executive Chairperson Neil Dickey addressed the party members present, reviewing the previous year and outlining his hopes for the future. Commenting, Neil remarked that, in many aspects, 2008 had been an unremarkable year with devolution relatively stable and the Alliance Party continuing to play a constructive role in the NI Assembly. Concluding, Neil stated that he hoped that Northern Ireland continued to experience the relative political stability experienced during 2008 for the forthcoming months whilst Northern Ireland experiences the effects of the global economic downturn.

Executive Secretary Michael Watts contrasted his remarks to the charismatic words used by US President Barack Obama during his recent Inauguration speech. Michael commented that 2008 had been a relatively successful year for the Alliance Party in North Down with many valuable fundraising events and a growing membership base. Looking ahead into 2009, Michael expressed confidence that we would be able to overcome the obstacles faced as a result of the “credit crunch”.

Outgoing Executive Treasurer Emma Bell reported a healthy state of finances and was thanked by all present for her service as Treasurer.

The North Down Association then elected it’s Executive Committee members with Jean Green re-elected as President, Neil Dickey as Chairperson and Michael Watts as Secretary.

A number of new faces were also elected with Andrew Muir elected as Vice Chairperson and Media Officer, Chris Mackey as Treasurer and Bryan Ardill as Membership Secretary.

Eileen provided a remarkable account of her time as Speaker, recalling some of the highs and lows, ranging from lunch with The Queen to the events at Parliament Buildings on 24 November 2006 involving Michael Stone and Devolution Day on 8 May 2007 when Dr Ian Paisley MP MLA was elected as First Minister and Martin McGuinness MP MLA as deputy First Minister.

Eileen detailed the nature of her current commitments including acting as Legislative Advisor for Autism NI and serving as Chairperson of Women into Politics.

People were then given an opportunity to view her CBE medal and a number of relevant questions were posed.

The meeting then concluded at approximately 9.30pm with all in agreement that it had been an interesting meeting touching upon relevant topics of particular interest.