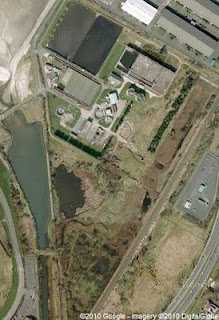 As readers may be aware I have been campaigning to secure an end to the Sewage Smell from Kinnegar Sewage Plant, and the area that surrounds it, for the last number of months.


After initially raising the matter with NI Water in February 2010 I was supplied with shocking statistics detailing a systemic problem in relation to Odour Emissions from the Sewage Plant with no fewer than 74 odour emission incidents in 2009 with the summer months of July, August and September particularly bad with over 50 odour emission incidents.

After receiving these shocking statistics I met with Senior Management from NI Water along with a local Kinnegar resident and was informed that NI Water were currently investigating the cause of the problem and hoped to find a solution”.
I have now been informed this week that a special team has been commissioned to look into the matter and make recommendations concerning possible solutions to the problem. The team has already made some initial findings which seems promising. The Senior Manager from NI Water has informed me that ‘emerging findings are that there are three potential storm overflows in NI Water network which could contribute to sewage discharges to the reed beds adjacent to the Waste Water Treatment Works.’

The Senior NI Water official will now be organising surveys of the sewerage system over the summer which, I am informed by the official, will ‘enable us to design a new drainage model to reduce, or preferably, eliminate the problem.’. The condition of the reed beds near Kinnegar Sewage Plant will also be examined and solutions sought to reduce the smell that emanates from them.
NI Water have informed me that their investigations will be thorough and will extend beyond the immediate area with Holywood’s sewerage system also to be checked. NI Water aim to complete their thorough investigation and produce a report by the end of October 2010.
As someone who cares passionately about the environment I welcome the progress but will continue to lobby NI Water and pile on the pressure until the odour problem is resolved. It is vital that our environment is safeguarded and a solution is implemented so that people living, working or travelling past Holywood no longer have to endure such a disgusting smell.
12 June 2010