Campaigners want you to fall in love with cycling 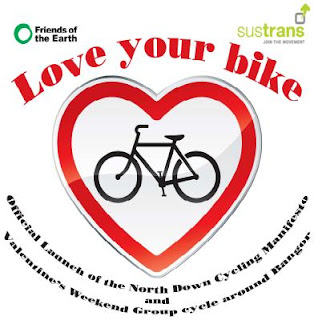 North Down residents are invited to fall in love with cycling this Valentine’s weekend, by joining campaigners on a bike ride around Bangor town centre on Saturday (12 February).
The event, called “Love Your Bike,” is part of North Down and Ards Friends of the Earth’s campaign for better cycling provision in the borough.
Cyclists will gather at Bangor Translink station at 10.30am, and proceed to cycle round the town centre, before arriving at Bikeworks Cycle Shop, 1 Balloo Link, for the launch of the campaign’s Cycling Manifesto for North Down.
Speaking on behalf of Friends of the Earth, Andrew Muir said:
“Taking up regular cycling is like embarking on a life-long love affair.  As well as being a quick and convenient way to get around town, getting on your bike has many health benefits, both physical and psychological.
“North Down suffers from serious traffic problems, lack of access for those without a car, and widespread health issues.  Our manifesto proposes simple actions to be undertaken by both the Council and the Department for Regional Development, which would make cycling throughout the area easier, safer, and more enjoyable.”
Mr Muir went on to say:
“If your bike has been abandoned in your garage all winter, then Valentine’s weekend is the perfect time to renew your commitment to cycling, by joining us at Bangor train station.”
Tea and coffee will be served at the manifesto launch at Bikeworks.
For more information, call Andrew Muir on  07813 945411 or email mail@andrewmuir.net.
When:             10.30a.m., Saturday 12 February 2011

Where:            Bangor bus and railway station, Bangor town centre, and finally the Bikeworks Cycle Shop on Balloo Link
What:              Campaigners supporting North Down and Ards Friends of the Earth’s cycling campaign will take part in a bike-ride demonstration around Bangor town centre, in order to highlight the need for better provision for cycling in North Down, and to launch a Cycling Manifesto for the area.  At one point along the journey, the group will stop to pose for photographs at a cycle advance stop line, to highlight the need for more of this type of road marking throughout the borough.
Why:               North Down and Ards Friends of the Earth has identified traffic congestion and a lack of provision for active transport as a serious issue in the area.  The group has suggested a number of projects and initiatives which could boost the use of bicycles, such as: the upgrade of the coastal path to permit cycling along the entirety of the route; a cycle path to be added to Bangor ring road; and better cycle parking at railway stations, shopping malls and supermarkets, and town centres.