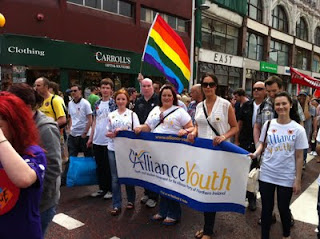 The continual anti gay comments from DUP representatives proves without any doubt that the recent alleged conversion by Peter Robinson and the DUP to the concept of a Shared Future is perhaps merely hollow rhetoric.
Key economists have proven that acceptance of lesbian and gay people is key indicator demonstrating whether a society is in fact truly shared, open and welcoming to all and able to grow a strong economy.
Until Northern Ireland (and the DUP) can pass this litmus test concerning acceptance of gay people our economy will continue to struggle and people will continue to emigrate. Parochial politics must end if we are to develop a strong knowledge based economy where diversity is seen as a strength nor a threat and companies invest in NI not just because government is waving a massive cheque.