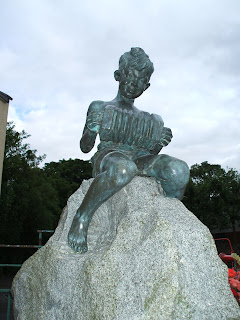 My fellow Alliance Holywood Councillor Larry Thompson and I are delighted following the recent decision by NI Environment Agency to abandon plans to de-list the iconic Johnny the Jig statue in Holywood, Co. Down.

Commenting on the development, Cllr Thompson stated “Following extensive lobbying by Cllr Muir and I, Holywood Conservation Group, North Down Borough Council, Historic Buildings Council, Ulster Architectural Heritage Trust and many concerned residents I am delighted that the NIEA has reconsidered their proposal and abandon plans to delist the statue. Without this protection the statue may have faced an uncertain future similar to other monuments across Northern Ireland which, over time, have either been destroyed or left to rot in storage warehouses.”

Concluding, Cllr Thompson stated “Johnny the Jig is an iconic statue by Rosamond Praeger, a well loved and respected local artist, which forms part of Holywood’s identity and will thankfully remain in place, protected in law. I would like to pay tribute to the Holywood Conservation Group for all their considerable work in helping to save Johnny the Jig from delisting."

Detailing the reasons to retain the statue as a listed structure, NI Environment Agency have stated: “We were persuaded to change our assessment by the level of local interest in the structure and the obvious significance it has for the people of Holywood and North Down”. NIEA previously described the statue as ‘a minor work of art with no special interest’.

When I learned about plans to de-list Johnny the Jig I immediately initiated a strong campaign to Save the Statue securing a meeting with top officials at NIEA and constantly lobbying them to abandon their scandalous plans to remove the protection afforded via listed status. NIEA’s decision is proof that a vigorous campaign can deliver results.

Whilst I am also delighted that the statue has been saved I will continue to work to save Holywood’s Heritage to ensure the Town remains an extremely attractive place to work, live or visit.

Johnny the Jig is a bronze figure of a boy playing an accordion and the work of local sculptress Sophia Rosamond Praeger, MBE, HRHA, MA (1867 - 1954). Her delightful bronze statue of a youngster playing the accordion was cast as a gift to the town and erected in 1953. It was created to commemorate a local Boy Scout named Fergus Morton who was killed in a road accident while doing  ‘Bob a Job’ in 1952.
Email ThisBlogThis!Share to TwitterShare to FacebookShare to Pinterest
Newer Post Older Post Home