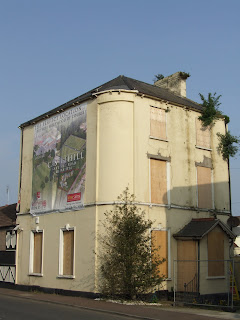 Holywood Alliance Councillor Larry Thompson has welcomed news that a letter of offer has been issued by the NI Environment Agency for Grant Aid towards essential repairs and redecoration of 1 Stewart’s Place, Holywood with work apparently to begin on site shortly. 1 Stewart’s Place was built in 1840 and is a listed building in the Town Centre on a street named after Holywood’s first Post Master.

Commenting on the development, Cllr Thompson stated “Over the last few years 1 Stewart’s Place has unfortunately fell into disrepair and is now extremely dilapidated. Emergency repairs effected a few months ago were merely cosmetic leaving the building in a serious state and structural damage now evident.

Whilst I am disappointed that the building has been allowed to deteriorate so badly news that funding has been awarded and work will soon commence to bring the building up to a basic standard is to be welcomed. I would like to pay tribute to the Holywood Conservation Group who have worked tirelessly to bring these matters to the attention of all concerned and to achieve a successful result".

Concluding, Cllr Thompson remarked “Whilst previous attempts by NIEA to force the site owner to repair the building have failed Grant Aid and news that the building is on the market for sale will hopefully incentivise the owner to carry out the necessary work. Facing 1 Stewart’s Place is its sister building 3 Stewart’s Pace which was restored in 1993 by Hearth Housing Association. This restored building provides a clear example of how 1 Stewart’s Place could look if fully restored. I will continue to lobby and support Holywood Conservation Group and UAHS as they campaign for action to restore this historic building which acts as a gateway into Holywood”.

Stewart's Place, Holywood is thought to have been built about 1840 by William Lowry, nos. 1 and 3 Stewart's Place are named after the first post-master of Holywood, Hugh Stewart. Forming a pair of three-storey stucco houses with rounded corners, they were listed in the mid-1970s, and are located within the recently designated Holywood Conservation Area. No.3 was restored by Hearth Revolving Fund in 1993, but, its neighbour, no.1, is currently in a poor state of repair. HB Ref No: HB23/20/020 A

More info at http://freespace.virgin.net/hearth.nireland/StewartsPl.html Offers are invited in the region of £175,000 by BTW Shiells http://www.btwshiells.co.uk/Site/Property.aspx?x=1141
Email ThisBlogThis!Share to TwitterShare to FacebookShare to Pinterest
Newer Post Older Post Home