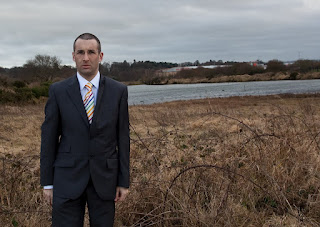 I am urging NI Water to progress their plans to tackle the sewage pollution problem at Kinnegar Lagoons, Holywood without any further delay after being contacted by numerous local people frustrated that the problem continues to cause an awful pong.

Since becoming a Councillor I have constantly pressurised NI Water to deal with the sewage problem at Kinnegar and was glad to achieve real progress with £100,000 spent to identify the cause of the problem during 2010 and approximately £3m earmarked in 2011 to implement a solution which will hopefully eliminate the problem. I am however increasingly frustrated that the required solution hasn’t yet been implemented.


After recently contacting NI Water to check everything was on course to meet the previous construction completion deadline of December 2012 I was disappointed to learn that the project has been delayed. It will be broken into two phases with Phase One starting this summer. Funding also still needs to be finalised and agreements secured with Roads Service and the Police.

Whilst I welcome NI Water’s commitment to deal with the problem the pace at which a solution is implemented must be quickened. People living, working or travelling nearby shouldn’t have to endure such disgusting smells nor is it acceptable that the scenic Kinnegar Lagoons remain polluted endangering nearby wildlife.

I will continue to lobby NI Water and campaign for the required solution to be implemented without delay. A meeting will take place in the next few weeks but if further delays are experienced I will not hesitate in exploring new options to ensure that NI Water are forced to act by other bodies such as the EU. The people of Holywood will not tolerate the pollution for much longer

Note – After conducting some research it’s apparent that a wide range of wildlife can be found in the Kinnegar Lagoons such as Great-crested Grebe, Shelduck, Swans, Oystercatchers, Gulls, Terms and Small Waders.

In 2010 I discovered that over 70 odour emission incidents occurred in the area in the last few years with the problem described by NI Environment Agency (NIEA) as ‘chronic’.