Cycling enthusiasts from across North Down headed to Dublin on Saturday 23 June 2012 to celebrate Bike Week with the Lord Mayor of Dublin Cllr Andrew Montague. Mayor Montague has championed cycling initiatives across the city since his election and is widely credited as a man behind the successful Dublin Bikes hire scheme.

A number of cyclists from North Down’s Bicycle friendly Borough campaign attended a formal reception at The Mansion House along with former Mayor of North Down Cllr James McKerrow and Sustrans Ranger Cllr Andrew Muir.

Whilst some let the train take the strain others used peddle power from Bangor to Dublin as part of the Co-operation Ireland Maracycle.

Commenting on the event, campaign co-ordinator Mary Lappin stated “With Dublin now known as a Cycle friendly City we were delighted to accept the invitation to meet the Lord Mayor. During our visit we were able to find out how Dublin has been able to deliver so many changes to make cycling more attractive. From bike racks outside the Mansion House to the Dublin Bikes Scheme and many new cycle paths The Lord Mayor has delivered real change which we hope to replicate in North Down.”

Commenting on the event Cllr James McKerrow remarked “I was impressed by how quickly Dublin has embraced the growing cycle infrastructure in the City.  It is low cost with big benefits in ease of movement and health outcomes.  We need to study this with some seriousness”

Local bicycle shop owner Paul Smith from Bikeworks Bangor cycled from Bangor to Dublin and commented “I was very impressed with the secure cycle parking provided within a ground floor multi story carpark by Dublin City Council and hope this can also be provided in Northern Ireland”.

One of the most useful lessons I learnt from our visit is the need to highlight the enormous benefits cycling delivers and the relatively small cost of bicycle friendly initiatives compared to other transport solutions. We look forward to building upon the engagement with Mayor Montague to learn how North Down can lead the way as North Down’s premier Bicycle friendly Borough. Remaining challenges such as need to upgrade remaining sections of the North Down Coastal Path shall be overcome! 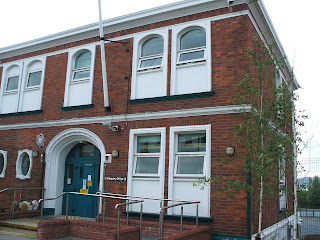 I am disappointed that the Police intend to slash Holywood Police Station Enquiry Office opening hours. The new arrangement, which is currently being consulted upon, will come into effect from end of June and will reduce Enquiry Office Opening Hours from 8am to 8pm seven days a week to 10am to 6pm Monday to Friday.

I am extremely disappointed the Police have decided to reduce Enquiry Office Opening Hours so soon after the station was saved from closure. Anyone wishing to present documents or call to the station in person to see an officer in the evening or at weekends will now have to travel to Bangor or beyond.

Whilst I am satisfied that the Station will remain operational after facing the threat of closure cutting Enquiry Office Opening Hours will inconvenience the public and increase the fear of crime. I therefore urge the Police to reconsider their plans and engage in a much more meaningful consultation rather than pretending to listen to views on what seems to be a done deal.
Email ThisBlogThis!Share to TwitterShare to FacebookShare to Pinterest

My View - Shared Future blanket a fashion accessory for some 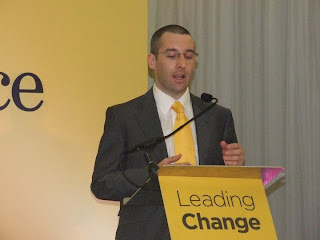 The concept of a Shared Society has been widely discussed in recent weeks after the Alliance Party withdrew from the Executive Committee which is still unable to agree a new Shared Future Strategy with ambitious targets to overcome the division that endures across Northern Ireland.

New plans for the Girdwood site in North Belfast also generated debate with segregated housing at either end of the site a disgraceful element of the plan which was agreed between the DUP, Sinn Fein and SDLP MLAs for the area. Leisure facilities in the middle of the site will act as a de-facto “peace line”.

The Alliance Party do not support the segregated proposals for Girdwood. They prolong division and are a polar opposite of what a Shared Society should look like.

Shortly after the Girdwood debacle the spotlight was then turned towards gay people. A recent Equality Commission report concerning public attitudes towards minorities provoked Ulster Unionist Lord Ken Maginnis to express his view that homosexuality is a rung on the ladder to bestiality. Despite the offence caused Ken remains both unrepentant and member of the Ulster Unionist Party. I have no hesitation in stating that UUP Leader Mike Nesbitt should expel Ken from the Ulster Unionist Party. Bigoted views such as those expressed by Ken have no place in a civilised society.

In between these stories the same old sectarian Council carve ups continued. It seems that nothing much has changed at Craigavon or Castlereagh with the DUP and Ulster Unionists still resisting power sharing. The Alliance Party will continue to oppose these carve ups. Sharing works, Tribal politics costs. Working together we can achieve so much more.

The focus has now returned to gay people with DUP Health Minister Edwin Poots confirm that the gay blood ban will remain. It seems that British standards are not good enough for this Unionist Minister who is happy to perpetrate discrimination whilst authorities in Great Britain focus more on risk not on prejudice. The Alliance Party oppose Edwin’s support for the gay blood ban and call upon him to bring Northern Ireland in line with the rest of the UK.

After all these events it is increasingly obvious that whilst the language of a Shared Society has now been embraced by the DUP, Sinn Fein, Ulster Unionists and the SDLP underneath the Shared Future blanket masking these parties the same old attitudes exist. Words, phrases and gestures are being used in an attempt to fool an electorate which increasingly wants a new type of society which embraces diversity.

If those wearing the Shared Future blanket are serious about building a Shared Society it’s time they stopped wearing it as a fashion accessory and took action to reverse the disgraceful actions taken in recent weeks.
Email ThisBlogThis!Share to TwitterShare to FacebookShare to Pinterest 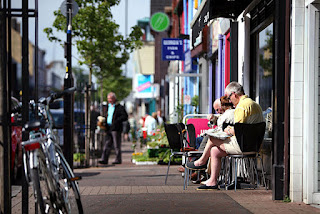 Work will shortly commence on devising a Masterplan for Holywood with the Department for Social Development and North Down Borough Council soon to start seeking the views of local people concerning future vision for Holywood Town Centtre. This will then help influence a programme of works to take place from 2013 onwards such as pavement improvements, signage etc. to regenerate Holywood and create an even more attractive Town Centre.

£1million funding secured will hopefully be matched by North Down Borough Council to create a £2million package which will help deliver a new enhanced Town Centre fit for the future. I urge all local businesses, people and community groups to engage with the Masterplan consultation when it commences.
Email ThisBlogThis!Share to TwitterShare to FacebookShare to Pinterest

My fellow North Down Alliance Councillor Larry Thompson and I are continuing the campaign to Save Cultra Station House after a recent meeting with senior government officials.

Cultra Station House was designed by renowned architect Charles Lanyon, built in circa 1863 and listed in 2007 when threated with demolition. We managed to secure the interest of the Environment Minister late last year who outlined his desire to “achieve a sustainable future for this building” and helped arrange a meeting with top officials from various government bodies which kick started the Save Cultra Station campaign.

Commenting on recent developments, Cllr Thompson stated “Working alongside Ulster Architectural Heritage Society and local groups such as Holywood Conservation Group we are determined to secure a better future for this building which is currently in disrepair and up for sale after it was acquired by Ireland’s ‘bad bank’ NAMA.

After sustained lobbying we were delighted to learn that NI Environment Agency have persuaded the owner to effect some repairs to the building to stop any further deterioration. Whilst we will monitor closely whether all the repairs are effected we have also been attempting to encourage and facilitate potential purchasers to develop plans for the site which will enable sympathetic restoration of the building and development nearby which does not detract from the historic and symbolic nature of the Station House. Cultra Station House is an architectural jewel in North Down’s crown and shouldn’t be allowed to fall into any further despair.”

Whilst efforts continue to safeguard the Station House and explore whether a developer can acquire and sympathetically restore the building we are also considering potential funders and government bodies who could enable restoration. Many examples exist of old Railway Station buildings transformed for public use e.g. social enterprise, crafts, food etc. and with the Ulster Folk and Transport Museum nearby a great opportunity exists to link a restored Station House with the Museum.

Anyone who wishes to be kept up to date on the Save Cultra Station campaign should ‘like’ our Facebook page at www.facebook.com/SaveCultraStationHouse Offers of practical support are also welcome in order to ensure this building doesn’t hit the buffers! I can be contacted via larry.thompson@northdown.gov.uk or telephone 07851 740301.
Email ThisBlogThis!Share to TwitterShare to FacebookShare to Pinterest
Newer Posts Older Posts Home
Subscribe to: Posts (Atom)