Women, Gay people and The Olympics 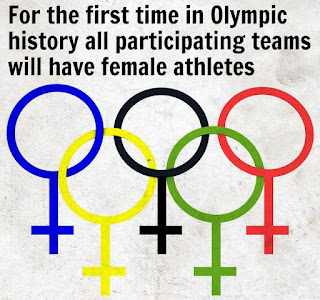 As we enjoy the London Olympics following an amazing Opening Ceremony the wider equality issues associated the Olympics should not go unmentioned.

Fact that women are now participating in all teams for the first time ever is fantastic and highly symbolic.

Going forward we must build upon this success, embrace the Olympics Motto (Faster, Higher, Stronger), aim higher and move faster towards even greater equality. No longer should homosexuality be a barrier to participation in sport whether due to social attitudes or legal barriers. Criminalisation of homosexuality must end.

News that only twenty of the 12,000 athletes competing in the games are openly gay is also concerning.

Whilst I have not experienced any homophobia whilst running for North Down Athletics Club (most certainly not in Olympic league!) I am in no doubt that institutionalised homophobia exists in many sports and needs tackled.  More info about the Olympics and Gay people at this excellent link. This is something I intend to follow up with the Minister of Sport in Northern Ireland and hope rather than warm words we see some real action and leadership.

Nor should the racist track record of some countries participating in the London 2012 Olympics go unchallenged. The racism in Bulgaria towards the Romani people, in Burma towards Burmese Indians and Iran towards Arabs, Kurds plus other ethnic minorities is wrong and should stop.

The symbolic gender achievement made should spur us on to deliver a more equal world free for discrimination where every human being is enabled to reach their best sporting potential regardless of race, gender, marital status, religion, political opinion, sexual orientation, class or background.
Email ThisBlogThis!Share to TwitterShare to FacebookShare to Pinterest

I welcome the provision of green Advance Stop boxes at traffic lights across Holywood by The Roads Service.

After some lobbying I was delighted to see these boxes appear across Holywood and beyond. Green Advance Stop boxes are designed to give cyclists a head start at traffic lights rather than having to compete with other vehicles. They are an important safety measure and shouldn’t be entered by motorists until the traffic lights turn green and cyclist has moved away.

I welcome the provision of these boxes and will continue to encourage the Roads Service, Department of the Environment and North Down Borough Council to take all necessary actions to make cycling a more safer, convenient, healthy and environmentally friendly way to travel.

Highway Code
61 Cycle Routes and Other Facilities. Use cycle routes, advanced stop lines, cycle boxes and toucan crossings unless at the time it is unsafe to do so. Use of these facilities is not compulsory and will depend on your experience and skills, but they can make your journey safer.

178 Advanced stop lines. Some signal-controlled junctions have advanced stop lines to allow cycles to be positioned ahead of other traffic. Motorists, including motorcyclists, MUST stop at the first white line reached if the lights are amber or red and should avoid blocking the way or encroaching on the marked area at other times, e.g. if the junction ahead is blocked. If your vehicle has proceeded over the first white line at the time that the signal goes red, you MUST stop at the second white line, even if your vehicle is in the marked area. Allow cyclists time and space to move off when the green signal shows. 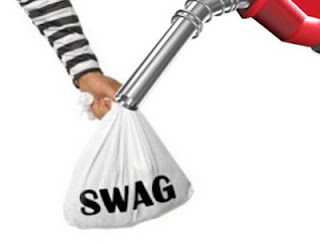 I condemn outright the despicable theft of 25,000 litres of diesel oil in North Down. The oil went missing from storage tanks at Craigantlet Quarry, with staff discovering it was gone early on Thursday morning, July 26.

A large vehicle would have been required to carry out this theft and I am appealing for anyone who was travelling in the area early this morning and may have seen something to come forward immediately.

Local businesses have enough problems in the current economic climate without having to deal with this type of behavior from within their own community.  It is even more worrying that this is the second time in a week that oil has been stolen from a business in the area.

There is no place in our society for those who would steal from hard working people.  I am appalled that two local businesses have now lost large quantities of oil and call on the community to work with the police to ensure no more thefts take place.

Remembering our Shared Past at The Somme

Last week I participated in a Pilgrimage to The Somme and attended the 96th Anniversary Commemoration Services on 1 July 2012.

I feel extremely grateful for the opportunity to pay my respects on behalf of North Down Borough Council to the fallen at the Battle of the Somme.

After visiting many cemeteries and the wreath laying ceremonies at Thiepval monument, Ulster Memorial Tower and at Guillemont for 16th Irish Division it is clear that we must redouble our efforts to learn more about our Shared Past to build reconciliation and avoid the horrors of war.

I was particularly grateful to meet people from all shades of political opinion united in their desire to commemorate all those who lost their lives during World War One. After laying a wreath at the 16th Irish Division Memorial I was fortunate to meet Dinny McGinley, TD Minister of State for Gaeltacht Affairs who now regularly attends the Commemorations alongside representatives from the British and French governments plus OFMdFM.

I also attended the first ever Somme Commemoration at a German Cemetery where the mutual suffering, loss and sorrow was recognised by all present in an extremely moving manner.

Photos of the Pilgrimage can be accessed by clicking here.
Email ThisBlogThis!Share to TwitterShare to FacebookShare to Pinterest 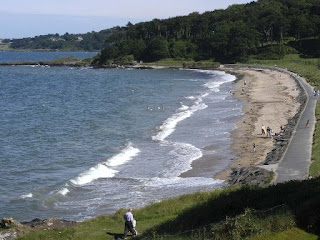 I welcome news that the risk of drowning at North Down’s most popular beaches has been assessed and action is being taken to enable people to swim more safely.

I was recently contacted by constituents concerned about the risk of drowning at Crawfordsburn and Helen’s Bay beaches. The lack of signage and life saving aids at these beaches has been a justifable cause for concern with many people entering the water for a swim when we are lucky enough to experience warm weather.

In response to these concerns I contacted Alliance MLA Judith Cochrane who kindly tabled an Assembly Question to the Environment Minister. Minister Attwood’s response details that the RNLI have assessed the risk of drowning at Helen’s Bay and Crawfordsburn Beaches and recommended a series of actions to be implemented such as improved signage and life saving equipment at the mouth of the Crawford’s Burn River.

I welcome this commitment to improve swimming safety at these popular beaches and will explore whether similar actions can be taken at other beaches in North Down under the remit of North Down Borough Council. Government does however require the co-operation of the public to ensure swimming safety. Swimmers should always follow the Water Safety Code spotting the dangers, taking safety advice, going together and onlookers ringing 999 when they spot someone in difficulty. Further advice can be sought from the RNLI and ROSPA and should be considered carefully before entering the water.

Question: To ask the Minister of the Environment what life saving equipment is in place at Helen's Bay and Crawfordsburn Beaches to reduce the risk of drowning.

Answer: The Royal National Lifeboat Institution (RNLI), in November 2011, at the request of the Northern Ireland Environment Agency, assessed the risk of drowning at both Helen’s Bay and Crawfordsburn beaches. The assessments indicated that the risks at both beaches are low. The key control measures suggested by the RNLI to make the beaches safer included signage to provide information to visitors before they arrive at the beaches and Public Rescue Equipment for the river mouth of the Crawford’s Burn, which shelves steeply. These measures are being procured and are expected to be in place by the end of May 2012. RNLI has advised that life rings and throw bags have been found to be ineffective for gently-shelving beaches such as Helen’s Bay and Crawfordsburn