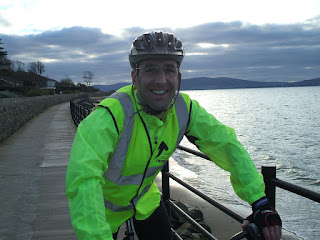 I feel very privileged to have recently been granted Honorary Membership of North Down Cycling Club, described by the club as an "exceptionally rare distinction".

The club further states on their web site that I have been awarded membership "In recognition of the work that he has performed to promote safer cycling in the North Down area. Anyone who has cycled on our roads will know that this is a massive battle since most North Down drivers have, at best, a vague understanding of how to share the road".

Since becoming a Councillor over two years ago I have greatly enjoyed combining this role with my interest in sustainable transport as a Sustrans Cycling Ranger and sport as a member of North Down Athletics Club to establish a Bicycle friendly Borough. Cycling is good for the body, mind and environment and must be made safer and more attractive.

When I became aware of inconsiderate and sometimes dangerous driving by lorries servicing quarries in the Craigantlet Hills I immediately took action liaising with the Police and meeting quarry owners onsite. Through this determined approach I hope that lorries will no longer endanger the lives of cyclists. I do however encourage anyone with concerns to contact me if the problem reoccurs.

In addition to this work I continue to lobby the Council and other bodies to upgrade the final section of the North Down Coastal Path to accommodate cyclists and pedestrians alike. More recently I have also called upon Council to change the by-laws, remove the No Cycling Signs and lift the threat of prosecution for any cyclists using sections of the path already upgraded to accommodate cyclists.

In recent months I personally raised concerns with the Justice Minister concerning the need for an improved response from the Criminal Justice System concerning motorists who injure cyclists on the road. Every ghost bike is one too many.

I am also campaigning for the provision of improved cycling parking facilities in Bangor and Holywood Town Centres, a Cycle Hire Scheme, greater enforcement to ensure safe unobstructed passage along cycle lanes, improved Cycle Path cleanliness through regular sweeping to remove debris and a new cycle path network between Belfast and Donaghadee using the pavement and spare road space near Orlock.

I will continue to work with all relevant partners in the Bicycle Friendly Borough campaign to address these and other issues. Together We shall Overcome and put the wheels in motion towards a safer and more attractive cycling culture in North Down.