Alliance Councillors Lead Change for Equal Marriage in North Down 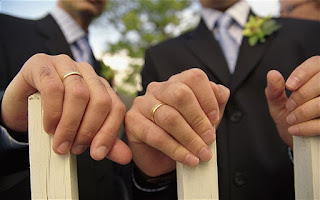 Alliance Councillor Michael Bower raised the issue of Equal Civil Marriage at North Down Borough Council on Tuesday night this week, saying it was simply a matter of equality.
Alliance joined with the Green Party, with Councillor Bower receiving messages of support and encouragement from across the Borough, demonstrating the backing the issue has locally.

In September Alliance became the first main party to form a policy in favour of the introduction of same sex civil marriage. Passing with 80 percent support, the vote took place after months of consultation with party members and associations, led by Deputy Leader Naomi Long MP, and called for equal civil marriage with robust protection for faith groups.

Speaking in the chamber, Councillor Michael Bower said: "I am someone who values marriage, so why would I wish to exclude anyone who also wants to enter into such a union with the person they love. Who are we to place a hierarchy of importance on two individuals' love for each other?

"One of the arguments against extending civil marriage provision to same-sex couples is that it would be a 'Trojan horse' to forcing religious organisations to officiate over same-sex marriage ceremonies. This would simply not be the case.

"No church or religious organisation would be compelled to do so, no more than any is compelled to officiate over a ceremony involving a divorcee, a non-believer, or absolutely anyone for that matter. The motion clearly addresses these concerns. In fact, were any proposal be made to introduce a law which would force religious organisations to officiate over same-sex marriage ceremonies I would unambiguously oppose it. My commitment to equality in this instance is matched by my commitment to freedom of religion.

"But of course, freedom of religion works both ways and it is wrong, as is currently the case, that couples of same-sex in Northern Ireland cannot have a legal ceremony in a place of worship, even if the religious organisation consents to it.

"This proposal to extend civil marriage rights to same-sex couples effects no-one other than those couples who would now have the right to get married. It does not weaken my marriage or any other persons' and it saddens me to see people claim that it will lead to some breakdown in society and devastation across the land. This is sensationalistic language which does nothing other than to increase the sense of isolation and inequality that many people who are lesbian, gay, bisexual or transgender feel today.

"I want to stand up for them. To let them feel that they have a voice. To give them hope, that one day they will experience a Northern Ireland which is genuinely shared, and actually embraces and celebrates diversity.

Councillor Larry Thompson – the oldest male member of the Council – also spoke in favour of the motion, saying it was a human rights issue.

He added: "England, Scotland and Wales have already taken strides towards Equal Civil marriage and Northern Ireland is in danger of being left behind.  Society is changing and we must change with it."

As Chair of the meeting I do not speak in relation to the motion but voted in support.