Mayor Muir - Working as One for Everyone 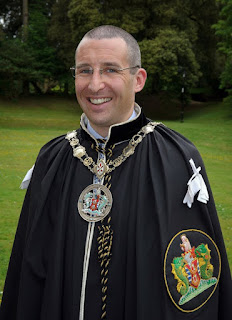 Yesterday I was elected as Mayor of North Down. I am enormously grateful for the opportunity to serve as Mayor and look forward to providing courageous civic leadership for everyone under the theme ‘Working as One’.

As Mayor of North Down I am determined to realise the momentous opportunities ahead and celebrate the diverse range of work taking place across the Borough towards a one shared vision of an integrated, peaceful, prosperous, active clean and green society.

With many enduring tough economic times I intend to do my utmost to bring people and businesses together and facilitate collaborative solutions to promote growth, develop skills and retain talent at a time when far too many young people are seeking a future outside Northern Ireland.

Bangor and Holywood Town Centres are set to be transformed from 2014 via £10 million Public Realm works investment in by the Council and Department for Social Development.  By Working as One we can revitalise and realise the big benefits possible.


Whether as a result of 400th Anniversary of Bangor's Town Charter during 2013 or commemorations in 2014 concerning outbreak of World War One and D Day the year ahead provides excellent basis to learn from our Shared Past and work as one towards a new future based upon respect for all with our Christian Heritage strengthened and enhanced in the run up to the 1400th anniversary of the death of St Columbanus in 2015.

As a keen sportsman I look forward to using the official opening of Bangor Aurora Aquatic and Leisure Complex, the World Police and Fire Games and RS Elite British National Yachting Championship as a springboard to further promote sports and active living in partnership with the many vibrant sports groups already across our Borough.

With North Down and Ards Councils due to merge in 2015 my challenge as the penultimate Mayor must be to leave a positive legacy for all. I look forward the year ahead, working as one we can create a home for everyone in North Down.

Councillor Muir recently served as Chair of the Council’s Corporate and Development Services Committee with responsibility for Economic Development, Tourism, Human Resources and related matters and has a personal passion for a new peaceful, open and welcoming society which respects and embraces diversity.

Mayor Muir is a committed environmental activist as a member of Friends of the Earth North Down and Ards Group and Sustrans Cycling Ranger whilst also a member of Holywood Residents Association, Holywood Conservation Group and Ulster Architectural Heritage Society.

Andrew graduated from the University of Ulster with a Peace and Conflict Degree and has worked with a range of arts organisations such as the Grand Opera House and Ulster Orchestra. He is a keen amateur athlete, competing for North Down Athletics Club and was made a honorary member of North Down Cycling Club in 2012.
Email ThisBlogThis!Share to TwitterShare to FacebookShare to Pinterest
Newer Post Older Post Home