Time for Health Minister to save Bangor Hospital

I am profoundly disappointed that the Health Trust have decided to permanently close the 20 bed GP unit at Bangor Community Hospital despite a strong and vocal grass roots campaign in support of retention.

The figures and facts used to permanently close the unit simply don’t stack up and completely overlook the massive social and health benefits the unit has offered for many years.

Whilst the Trust have decided to permanently close the unit the final decision now rests with the Health Minister. I would urge the DUP Minister to reflect upon the cross party campaign mounted against closure plus the strong local feelings expressed and reject this ill thought out decision.

After the amazing Giro D’Italia event last year it was fantastic to be able to recreate the Giro feeling again in 2015, wear a little pink and help guide over seventy cyclists at a leisurely pace from Holywood to Titanic Quarter and cross the finish line used by Giro Fondo cyclists the next day. Saturday proven again that cycling can be fun, healthy and a sustainable form of transport which I hope will continue to grow in popularity over the years ahead via the Giro legacy events and local initiatives undertaken by, for example North Down Cycling Club who held another brilliantly successful Coastal Challenge event on Sunday.

Sustrans Volunteer Jackie Mitchel from Holywood said: “Many will remember the great atmosphere of the Giro d’Italia and the buzz about cycling. The Gran Fondo is for non-professional cyclists who want to compete but the Piccolo Fondo is a great chance to join in for a relaxed bike ride into the city. You don’t have to be a lycra-clad racing cyclist but just enjoy being out on your bike. So come explore with us the National Cycle Network (NCN). Tell your family and friends, get into the pink and come along for the ride.”

I condemn the recent appearance of Paramilitary Flags across Bangor and urge statutory bodies to step forward and agree a unified plan to ensure their removal.  I have been contacted numerous times since the flags started appearing with many people appalled to see flags erected for illegal proscribed terrorist organisations.

I, along with many other people across North Down, am appalled to see flags erected for illegal proscribed terrorist organisations. The vast overwhelming majority of people across North Down are law abiding tolerant citizens who respect the Police Service of NI, abhor intimidation and criminality and want us to move forward away from the shadow of all paramilitary organisations, whether Loyalist or Republican. Support for terrorist organisations was never acceptable in the past and must never be tolerated today or in the future. 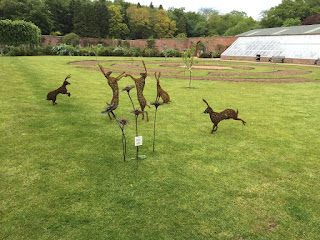 It's inspirational to see Bangor Castle Walled Garden featuring such a wide range of innovative items designed by local artists. With a rich history Bangor Castle Walled Garden contains many features, plants, Band Stand and cafe which help make North Down a great place to visit or live, enhanced by the current Public Art sculpture exhibition. I greatly enjoyed the guided tour on Saturday and would encourage everyone to pop along and enjoy the exhibition and Walled Garden which is located opposite Bangor Aurora Leisure Centre.