I am delighted to learn that the Regional Development Minister has bowed to public pressure, suspending sale of a local reservoir and surrounding land, after she announced on Tuesday 26 January 2016 the sale of Ballysallagh Upper reservoir and adjacent land at Cairn Wood forest has been put on hold.

In comes in the wake of a campaign run to save the area from sale. A public petition set up by myself, which was handed to the Minister last week, now has almost 3,000 signatures to date.

Earlier today, Alliance colleague Chris Lyttle MLA and I met Minister McIlveen, again impressing the importance of a prompt intervention. I am delighted that a few hours later the sale has been halted.

At the beginning of this campaign, those who wanted to prevent the sale of Cairn Wood Forest and the surrounding land said we would not just stand by and allow it to take place. I am delighted the Minister has finally listened, taken on-board the views of the thousands of people who signed the petition and made this decision, despite her initially informing us she could do nothing about the issue.

Whilst disappointed it took such a vigorous campaign, nearly 3,000 signatures for my petition and sustained lobbying from many people, I am glad to see people power deliver, albeit at the eleventh hour just before I was about to bring a motion to Ards and North Down Borough Council seeking support for Councillors to intervene and stop the sale

The campaign is however not over. We need the option of a sale to the highest bidder to be permanently removed, full details on proposed transfer to Forest Service and the area kept in its natural tranquil state.

Information provided today by the Forest Service stating "The land already makes a considerable contribution to public recreation in the area, and the business case will need to establish the role of recreational partner providers in line with the well established partnership approach adopted elsewhere with local councils” needs further clarification without delay in order to avoid any concerns that the tranquil nature of the site may be lost.

Council gets second chance to Save Cairn Wood

I am profoundly disappointed that Regional Development Minister Michelle McIlveen has thus far refused to act to save Cairn Wood Forest, an environmental haven and popular amenity spot used by many from across North Down, Ards, East Belfast and beyond. Minister McIlveen is standing idly by despite surge in public support to stop Sale of Cairn Wood Forest with over 2,700 people signing the Petition calling upon the Minister to halt the sale, including, it seems, her own colleague Jim Shannon MP and support from Ards and North Down Borough Council for my motion urging the Minister to act. 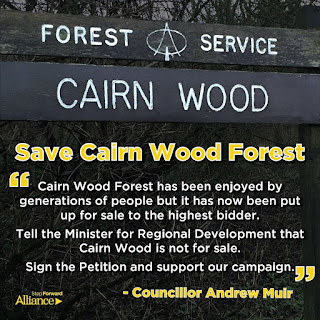 With Minister McIlveen unwilling to save Cairn Wood I am determined to explore every avenue to stop Cairn Wood being sold to the highest bidder. I have therefore submitted a Motion giving Ards and North Down Borough Council a second chance to Save Cairn Wood by expressing an interest in acquiring. This follows previous attempt by the Alliance Party in December 2014 calling upon the Council to explore costs and issues associated with acquiring Reservoirs and adjoining lands offered for sale by NI Water.

My motion will be debated at full Council meeting in Bangor Castle next Tuesday 26 January 2016 from 7pm, if Mayor deems issue urgent and permits debate on the night. With real concerns sale could be concluded soon I would urge all Councillors to vote for the motion. With the Minister disinterested and sale plans being pursued apace, unless Council acts this amazing asset could be lost forever.

At the very least the Minister could act and allow Council to pursue these plans without having to worry about sale being closed in the near future. I plead with her to let Council exercise this second chance without worry of being gazumped and watching this valuable asset being lost forever.

With Northern Ireland one of the lowest levels of tree cover across all of Europe we should be expanding our forests not letting NI Water to pursue a short sighted get rich quick plan to sell Northern Ireland’s family silver to top-up government coffers.

I took the campaign to save Cairn Wood from sale today (Tuesday 19 January 2016) to the Northern Ireland Assembly with the Petition I set-up in early December 2015 calling on the Department for Regional Development Minister Michele McIIveen MLA to remove Cairn Wood from sale gathering over 2,500 signatures, ensuring local voices heard as the campaign to save the much treasured local resource continues.

Today my colleague Chris Lyttle submitted the petition directly to the Minister in the Assembly, making it clear local people won’t stand idly by while Cairn Wood is sold and disposed to the highest bidder.

I’m grateful to the 2,500 plus people who have signed the petition and the many who have been vocal on the ground since the Minister’s plan became clear in November.

Now is the time for action.  The Minister has made it clear she expects the sale to be concluded within weeks, but she can’t ignore the voices of a community determined to protect Cairn Wood.

With NI Water determined to sell off Cairn Wood to the highest bidder, the Minister must instruct that the site is removed from sale and instead return it to the public to be enjoyed by all.

I look forward to the public meeting on Friday and I’ll be pursuing other avenues to keep this valuable asset within public hands.

Chris Lyttle MLA added: “I was delighted to formally submit this petition on behalf of everyone in North Down and surrounding area who get much use and enjoyment out of Cairn Wood.

“I am also adding my voice to call on the Minister to do what she can to save this valuable asset used by dog walkers, families, mountain bikers and ramblers alike.”

I am delighted government authorities have finally commissioned the new eCar charge point at Bangor Aurora after prolonged lobbying and hope they will now grant my request for an additional eCar charging point bay at the popular Quay Street location in Bangor after being contacted by many users disappointed they can’t recharge their car due to lack of eCar parking bays.

With regards to the eCar charging point at Bangor Aurora Leisure Centre, despite installation taking place in July 2015 and assurance from the Minister for Regional Development that all sites installed were now commissioned the eCar Fast Charging Point at Bangor Aurora was only commissioned for use on Monday 18 January 2016 after prolonged lobbying and correspondence on the issue. Only to see the point go live now was a scandalous waste of public money but hopefully lessons have been learnt and this will not re-occur.

With regards to the eCar Charge Point at Quay Street, Bangor, since the installation of this charging point a number of years ago Electric Car ownership has increased and consequently number of people using Charging points located across Northern Ireland. With the Quay Street eCar charging point offering ability to charge two vehicles at once but only one dedicated eCar Parking Bay, users are often contacting me to detail their frustration at not being able to charge up due to the other bays being occupied by conventional vehicles.

With all day parking also permitted at this location, the other nearby bays are often occupied for the entire day by conventional cars, thereby putting 50% of the charging point out of action with facility to charge two vehicles inhibited. I would therefore urge the Department for Regional Development to designate two eCar Charging Bays rather than merely one as currently available.

I have now secured the support of Ards and North Down Borough Council as part of my on-going campaign against the sale of Cairn Wood Forest.

The Council meeting comes after I launched a petition which has gathered over 2,000 signatures – which is set to be presented to the Minister at the Assembly next Tuesday 19 January 2016. Come along and support us at 10am at Parliament Buildings, Stormont!

NI Water is determined to sell off Cairn Wood to the highest bidder, a move which DRD Minister Michelle McIIveen is completely compliant with.

Left up to them, this fantastic asset used by dog walkers, mountain bikers, ramblers and many other will be lost forever and all for what seems to be no more than a plan for NI Water to make some easy money with a uncertain future ahead for Cairn Wood and real worries about what site could be used for.

You only have to look at the numbers who have signed my petition – only launched at the start of December 2015, but with already over to 2,000 signatures – including it seems the DUP’s own Jim Shannon MP.

Local people have made it clear, Cairn Wood is a resource to be treasured and they aren’t prepared to stand back and allow NI Water and the DRD Minister take it away from them.  Everyone is invited to come along to show their support for the campaign to stop the sale of Cairn Wood at Parliament Buildings, Stormont next Tuesday January 19, 2016 at 10am when the petition will be presented by my colleague Mr Chris Lyttle MLA.

As one person who has signed the petition stated ‘Once sold never retrieved. Sell in haste and regret at leisure’.
Email ThisBlogThis!Share to TwitterShare to FacebookShare to Pinterest

Hundreds in support of save Cairn Wood Forest campaign

I welcome the surge in support for the campaign against the sale of Cairn Wood Forest with Petition I established calling for the Minister for Regional Development to halt the sale now receiving over 1,700 signatures. I am delighted to receive such a strong level of support against disgraceful plans to sell Cairn Wood Forest to the highest bidder.

Over the Christmas and New Year period Cairn Wood was again extremely popular with the car park regularly full but sadly, if plans proceed, this amazing asset could be lost forever due to the actions of NI Water, a body within the Department for Regional Development. Sale of the Forest seems to be a short sighted get rich quick plan to sell Northern Ireland’s family silver to top-up government coffers.

Over the last number of weeks I have been inundated by people to seek action to stop the sale and can happily report that Ards and North Down Councillors will be given an opportunity to voice their opposition to sale on Tuesday 12 January 2016, 7pm at Council offices in Newtownards. At the Corporate Services Committee Meeting Councillors will consider my motion calling upon the Minister for Regional Development to halt the sale. I sincerely hope that local politicians will listen to the will of the public and unite against sale plans.

Motion to be debated at Council “That this Council agrees to urgently write to the Minister for Regional Development requesting that she instruct NI Water to remove Cairn Wood Forest, Craigantlet from sale and leave it within public hands open for public use on the same basis as enjoyed by many over previous decades.”