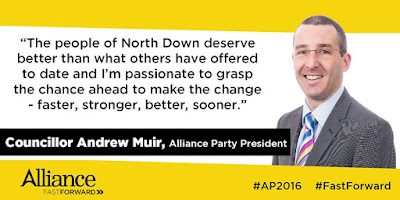 As President of the Alliance Party I chaired our 46th Annual Conference on Saturday 5 March 2016, below is abridged version of my opening address:

We are gathered here today less than nine weeks away from what could be a momentous Assembly election.

I’ll talk a little bit more about this election and also the forthcoming Brexit Referendum in a minute but first I feel it’s important to put on record my thanks to all those MLAs who have decided not to pursue re-election on the 5th May.

Both Kieran McCarthy, Judith Cochrane and Anna Lo have shown real commitment to the party and their constituents over many years but each has decided not to continue as MLAs. I am extremely thankful for their service and wish them well. Chris Lyttle will speak later today about the contribution each has made but as Party President I feel it’s important to formally note the positive legacy each will be leaving in South Belfast, East Belfast and Strangford for Duncan, Paula, Naomi, Tim, Chris and Kellie to hopefully take forward from 5 May.

In nearby North Down Stephen’s not going anywhere but rather we’re poised to make the much needed and long awaited breakthrough so many people have yearned for over the last five years. After narrowly missing out on securing two Alliance MLAs in 2011 by just 99 votes the stage is now set for both Stephen Farry and I to make history and become part of a strong Alliance Party Assembly Team at Stormont.

Our bid to secure two Alliance MLAs for North Down will not be merely be won via the election campaign ahead, although it is important, but rather will hopefully be as a result of our relentless delivery week after week, month after month, year after year.

Whilst locally parties of protest stand on the sidelines and both the DUP and the Ulster Unionists continue to shirk responsibility, devoid of leadership, vision or any real desire to reach out beyond their old tribal trenches, Stephen and I have been working hard, delivering for everyone and standing up for an entirely different type of future where each individual is valued as an equal citizen, enabled to reach their full potential as part of a new Northern Ireland where work pays with quality jobs and sustainable development the name of the game.

Stephen will speak later about his extensive track record of delivery as Employment and Learning Minister which features a real wide range of achievements, from Apprenticeships to capping Student Fees to a £12million creative hub for Bangor it’s a record second to none and something we should all be proud of.

As the other part of the Alliance Party’s Assembly ticket in North Down I am proud to have the opportunity to put my name forward as an Assembly Candidate alongside Stephen.

Day after day it’s great to meet people across the constituency delighted to hear that they will have the opportunity to vote for me, not just because my vision and values connect with many but also as a result of my passion, commitment and long history of delivery on the ground.

Whether it’s stopping the sale of Cairn Wood Forest, delivering a £4.5million project to end the stench and pollution in Kinnegar Lagoons, Holywood, saving the Kindertransport Farm in Millisle which was home to many refugees fleeing the Holocaust during the 1930s and 40s, securing plans to restore both the historic Cultra Railway Station and the nearby Craigowen Lodge or working with both older plus Bind and Visually impaired people to overcome the obstacles faced in our new Town Centre’s I am proud of my track record.

As an active person keen to ensure as many people as possible can enjoy the wonderful parks and paths across North Down, I am delighted to have secured numerous upgrades at different sections of the North Down Coastal Path, plus new paths and a 5k route at Redburn Country Park. Whilst I may not have been able to enjoy the course this morning, I am also thrilled to see Bangor parkrun become one of Northern Ireland’s most popular 5k runs after founding the weekly run in 2014 and look forward to growing Donaghadee 5k into an even bigger event after establishing it in August last year.

My reputation locally is not however merely confined to my work as a Councillor but also as a result of a busy year as Mayor when I undertook over 700 engagements under the theme of Working as One.

Throughout my term as Mayor I sought to reach out and stand up for an inclusive, open and welcoming Borough and enjoyed very minute of it.

From faith groups to ethnic minorities, young and old, to homeless people and the local Army, to people with a disability and to those from across the globe, I relentlessly pursued my goal of an inclusive future for everyone, undertaking engagements on Christmas Day and becoming the first Mayor to attend the Awards Ceremony for our local Gaelic Athletic Club.

From sailing at speed to promote the Catamaran Championships, an open water swim, or leading a cycle ride from Holywood to Titanic Quarter, I enjoyed being one of the most active and energetic Mayors ever and grasped every opportunity to make a difference particularly when it came to reaching out across society.

I’ve continued this work after my Mayoral year, providing leadership with or without the Mayoral chain and last year was noted to be the only politician to speak out about the illegal erection of paramilitary flags across Bangor and beyond, calling not for negotiations, but for their immediate and prompt removal.

For a number of months last year local residents, visitors and investors were forced to endure flagrant demonstration of support for illegal proscribed terrorist organisations via the erection of these flags.

The Alliance Party has a clear record standing up against all paramilitaries, regardless as to whether these criminal gangs masquerade as loyalist or republican and will not shirk from speaking up for the vast overwhelming majority of people across North Down as law abiding tolerant citizens who respect the Police Service of Northern Ireland, abhor intimidation and criminality and want us to move forward away from the shadow of all paramilitary organisations.

On the 5 May residents from across the place I am proud to call home will have an opportunity to bring to an end the era of inaction, hollow words and them and us political campaigning simply focused on keeping them’ uns out.

I’m confident they will positively stride forward to embrace the opportunity to elect Stephen and I and intend to fight the election campaign ahead with every fibre in my body. The people of North Down deserve better than what others have offered to date and I’m passionate to grasp the chance ahead to make the change, faster, stronger, better, sooner. It’s a prize that’s worth winning, it’s within grasp and together with the strong army of volunteers already out knocking doors and delivering leaflets, we can do it!
Whilst we are all focused on 5 May it cannot be ignored that we will also go to the Polls again a few weeks after the 5 May to determine whether we stay in or leave the European Union. On 23 June people from across England, Scotland, Wales and Northern Ireland will hopefully vote for the UK to remain a member of the EU. Our job here in Northern Ireland and as the Alliance Party will be ensure the maximum possible vote in favour of remaining as members of the EU.

Unlike other parties who have flip flopped over the issue of EU membership, or would prefer to pull up the draw bridge, the Alliance Party has always been firmly pro-European, Internationalist in outlook, Liberal in thinking and committed to an open, welcoming and inclusive future.

Unlike some, I am confident that we will be able to win the debate and secure the votes but complacency is a dangerous thing, especially when faced with the consequences of what a vote to leave would mean.

With 60% of Northern Ireland’s exports going to the EU and 50,000 jobs linked to trade with the European Union, a lot is at stake.

With a shared land border and signed trade agreements already in place between the EU and many many countries it would be sheer madness to move into the unknown and uncertain endangering not just our trading position but also the vital EU Funding Programmes which help many across Northern Ireland.

With such stark facts and an Assembly election which will determine our government and future for five years it’s vital we approach the weeks ahead with courage, commitment and a real desire to communicate the Alliance message to each and every household. This broadcast is part of our plan - view at https://youtu.be/3dCNNa1FtVs