Time to stop legitimisation of paramilitaries

Letter below published in County Down Spectator on Thursday 10 March 2016. 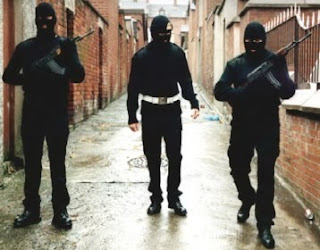 I write in response to recent reports concerning the situation within Clandeboye Village and the influence of Paramilitaries. For far too long local communities across North Down and beyond have been forced to live under the influence of illegal terrorist organisations whose only focus is control of the areas and progressing their criminal activities such as drug dealing, racketeering and extortion.

Last year following the erection of paramilitary flags in the Clandeboye area local people courageously stepped forward and requested their removal. The response from statutory bodies, including the Police, sadly followed previously failed approach, suggesting dialogue and discussions rather than respecting the will of the vast majority of people across North Down who desire immediate and prompt removal of such flags which demonstrate support for proscribed terrorist organisations who have murdered and maimed hundreds.


With many constituents contacting me requesting removal but statutory bodies unwilling to act I hoped making a public call for removal would elicit support from others but instead was met with complete and utter silence from both the DUP and the Ulster Unionist Party who disgracefully failed to demonstrate the leadership and courage others, such as Clandeboye residents, demonstrated by publicly speaking out and calling for removal.

The situation in Clandeboye, Willowbrook and other areas then evolved as many will be aware with disastrous consequences. A few months later and plans are already being made to again erect bonfires and no doubt paramilitary flags whilst significant amounts of funding continuing to flow to organisations and individuals closely related to paramilitary organisations with the active endorsement of some in high office.

Rather than accepting this as a fait accompli I urge all statutory bodies and those in political life to take this opportunity to stand up, end the culture of legitimisation and commit to the immediate eradication of paramilitary organisations by taking some important first steps by never again suggesting that residents should enter into mediation with local terrorists, reviewing funding awarded and stating that the display of flags, shrines and murals for illegal proscribed terrorist organisations across the Borough is wrong and statutory bodies must act to ensure removal whenever such occurs.

North Down deserves better than the past inflicted upon it by paramilitaries of whatever shade.