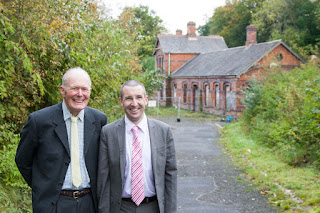 I am delighted at news plans to restore Cultra Station House have been given the green-light for early May.

I have been leading the campaign to save the well-known local site since 2011 – when the listed building was put up for sale by Ireland’s Bad Bank NAMA. A brighter future is ahead as a result of sustained lobbying and hard work.

Far too often we see historic buildings gradually fall into disrepair, left to whither and fall into ruins until demolished and lost forever due to Health and Safety concerns. Whilst previous plans existed to renovate and convert Cultra Station, but these quickly hit the buffers when the economic crash hit Northern Ireland with Ireland’s Bad Bank NAMA acquiring the property in 2011.


Rather than watching the property deteriorate any further I was determined to grasp the opportunity presented and actively worked to save the building, whether via the Irish Parliament to get NAMA to progress the sale, NI Environment Agency in relation to Listed Building consent or the Planning Service to sort issues with the new Planning Application which involves just two units within the building rather than original plans of four.

Despite the many challenges encountered I am proud to be part of realising the dream of many to save such an historic building which was designed in the style of renowned architect Charles Lanyon, built in circa 1863, and has remained on the Built Heritage at Risk Register for many years following listing in 2007.

I am extremely grateful for the support provided by local groups such as Holywood Conservation Group and Ulster Architectural Heritage Society plus David Crowe who purchased the building in 2012 and has shown great forbearance after facing many obstacles on road towards restoration, including the withdrawal of Grant Aid”

Local retired Conservation Architect and former Alliance Councillor Larry Thompson was also involved with the project and provided specialist assistance to bring the project to this stage.

He added: “I am overjoyed to hear that commencement of construction work is imminent.

Many lessons can be learnt from this situation, whether the previous decision to grant four rather than two units, the need for much quicker decision making in relation to the Planning Application or the short sighted decision to end Listed Building Grant Support, time after time the new owner was forced to navigate obstacles to keep the project on track or wait whilst government left the lights at red.

“I look forward to seeing the building restored and am confident it will be enjoyed both by those who eventually reside within it and the thousands of commuters who will travel past each day as a lasting testimony of what can be achieved via hard work and perseverance.”

Condition report
The Condition Report, conducted as part of the sales process, outlines some of the issues affecting the building after lead valleys and artificial slates were stolen and it was allowed to fall into its current state. The report makes the following conclusions;

Cultra Railway Station consists of a single storey station building and attached two storey stationmasters house located within a popular and much sought after part of Co. Down close to main arterial routes into Belfast City Centre.

The property is listed, however, it is evident that a large number of alterations have been carried out in the past which would likely not have been approved if the property was listed at the time the alterations were carried out namely the removal of the chimney stacks, the replacement of the original roof covering with artificial slates and the fitting of uPVC rainwater goods.

The property is in an extremely dilapidated condition with holes to the roof where lead has been stolen, dampness to chimneys due to a lack of lead trays, some movement to external walls, significant dry rot throughout the property, poor plaster, poor ceilings, significant dampness to walls, and dated services. The entire property will require complete gutting should any future use be considered.

It is the opinion of the author of this report that given the level of refurbishment necessary to the subject property for any future use following refurbishment it would likely prove more economically viable to demolish and rebuild the property. However due to the listed status of the building this is unlikely to be possible.

It is considered essential that the property remain fully secure due to the health and safety risk associated with the property where no balustrading exists, dry rot exists to first floor areas and where much asbestos appears to exist.

Cultra Station House was built in 1897 assumed to be designed by G.P. Culverwell. The property is built in typical decorative red brick late Victorian fashion. The property consists of a listed building partially two storey and partially single storey positioned to the side of the railway tracks at Cultra. The two storey portion of the property was originally living accommodation for the station master and the single storey portion was the area for waiting, ticket collection and other areas associated with a railway station.

Property has been a private dwelling since at least 1937 and in private ownership since 1957, vacated 1970s when it fell into disrepair, vandalised and used for anti-social behaviour