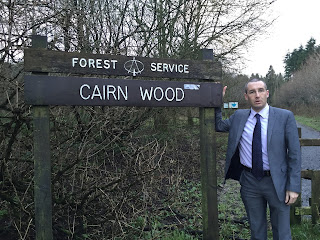 I have concerns that the assurances recently given concerning the future of Cairn Wood Forest may be hollow after both the Forest Service and the Minister for Agriculture and Rural Development have both avoided meeting requests to clarify future plans.

On 26 January we witnessed the Minister for Regional Development step in at the last minute and halt plans to sell Cairn Wood but yet, just over two months later, we are still left in the dark and know nothing more about the possible transfer to the Forest Service.

After leading the campaign against the sale of Cairn Wood I was delighted to see the Ministerial u-turn, halting the sale after previously stating nothing could be done. Action was achieved only as a result of the combined efforts of many with nearly 3,000 people signing my petition which I submitted to the Northern Ireland Assembly. Days later the Minister then halted the sale, just a few hours before I was about to propose that Council explore acquisition of the Forest.

Immediately after the announcement I sought to meet with Forest Service Chief Executive Malcolm Beatty who then deferred to the Minister for Agriculture and Rural Development, Michelle O’Neill MLA. With my colleague Chris Lyttle MLA raising the issue on the floor of the Assembly and securing a clear commitment to a meeting from Minister O’Neill I was hopeful we would achieve progress but sadly nothing has materialised, despite sustained contact with the Ministers office.

With Michelle O’Neill’s term as Minister now complete people are left none the wiser whilst commercial plans for the neighbouring Reservoir continue to be pursued and a vague ‘johnny-come-lately’ proposal has surfaced from the DUP omitting important requirement that the Forest remains within public hands.

Whilst I will continue to seek more information and am pursuing a request to meet Departmental officials I am increasingly concerned that hollow commitments were given as a stalling technique to defer the issue until after the election when we could again have to fight hard to ensure the Forest remains in public hands. My recent Freedom of Information request will hopefully elicit some answers to replace the silence which has only served to heighten suspicions.