Muir slams news another Post Box lost in the mail 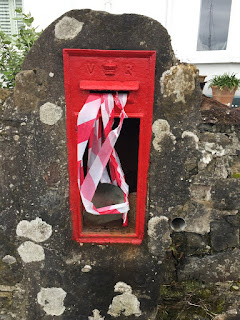 The front door of the historic Post Box at Seafront Road, Cultra was removed shortly before the Easter Holidays by Royal Mail citing corrosion with replacement plans rather unclear until local residents and Councillor Muir intervened.

Following on from the ongoing debacle concerning the removal of Post Box at Station Road, Craigavad I was appalled to learn from local residents just before the Easter break that yet another Post Box had been removed.

With the Post Box at Seafront Road a unique Victorian box which regularly attracts attention of passers-by, forming part of a listed building and also enjoying a good level of usage I have been working hard to resolve the situation.

Investigations have unearthed news that the door was removed due to corrosion and since it is now found to be beyond repair for continued usage a new plan secured.

The historic box will be restored to its original beauty but decommissioned for use and, in order to avoid any confusion, painted black as per arrangement which has already received stamp of approval from English Heritage.

A new post box for public use will also be located nearby, following receipt of necessary approvals from Transport NI.

With local people exasperated following recent events at Station Road I intend to monitor this issue carefully to ensure these commitments are fulfilled and Holywood gets the First Class service it deserves from Royal Mail.

I gained a sneak preview of the refurbishment work underway at old Cultra Station House last Friday 7 April 2017 visiting the building along with retired Alliance Councillor, Conservation Architect and Chair of Holywood Conservation Group Larry Thompson RIBA and am able to report significant progress with refurbishment works timetabled to complete by Summer 2017.

Dating back to 1897, Cultra Station House was listed in 2007 when threated with demolition but remained in an awful state of disrepair until recently. A Condition Survey commissioned in 2012 stated ‘it would likely prove more economically viable to demolish and rebuild the property’

After years of relentless lobbying I was delighted to see the building restored to its full glory. Whilst the campaign nearly hit the buffers on a number of occasions, whether due to bureaucratic officialdom from the Planning Service or attitude of the previous owners (Ireland’s bad bank NAMA) both Larry and I kept the project on track and are delighted to see the project come to fruition.

Careful restoration work undertaken has helped bring the building back to life with traditional exterior contrasted by impressive interiors to deliver two spacious units within the old Station House sensitively complimented by three additional units within the site. It will be fantastic to see people living in a building previously on the brink of demolition. 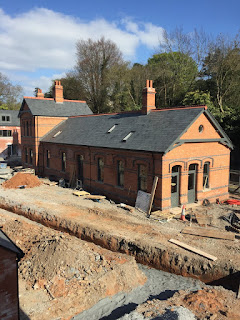 I am particularly grateful to NI Environment Agency, Holywood Conservation Group, Ulster Architectural Heritage Society, former TD Dominic Hannigan and the many other interested people and groups who helped ensure it was full steam ahead for the Save Cultra Station House campaign. Once complete it will be fantastic testament to fact that hard work and determination delivers.

Cultra Station House was built in 1897 assumed to be designed by G.P. Culverwell. The property was built in typical decorative red brick late Victorian fashion.

Property has been a private dwelling since at least 1937 and in private ownership since 1957, vacated 1970s when it fell into disrepair, vandalised and used for anti-social behaviour.


Read more »
Email ThisBlogThis!Share to TwitterShare to FacebookShare to Pinterest 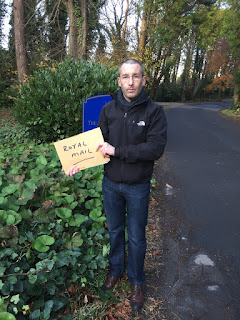 I have stepped up his campaign to secure a replacement post box for residents of Station Road, Craigavad.

The area has been missing a Post Box since a freak accident with a lorry damaged the original box beyond repair – yet Royal Mail has to date refused to replace it, despite many petition signatures and letters of support from local residents.

Ards and North Down Borough Council will now formally write to Royal Mail, requesting they reconsider that decision, after Councillor Muir’s campaign was backed unanimously at the recent Council meeting.

“What might seem like a trivial issue to some is causing great inconvenience for many residents, who are being forced to travel further to access the same service through no fault of their own.

Whilst Royal Mail have consistently dug their feet in and refused to listen to the concerns of local residents, I’ve continued to push on their behalf and I’m delighted to now have the full backing of my Council colleagues.

We should never underestimate the changes that we can make and I look forward to hearing Royal Mail’s formal response plus the Postal Review Panel who I have also written to asking for their support.
Email ThisBlogThis!Share to TwitterShare to FacebookShare to Pinterest 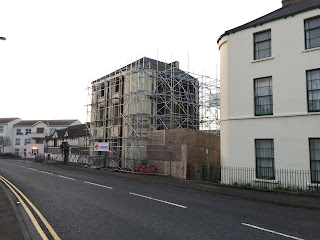 I welcome the re-opening of Bangor Road, Holywood after the long running 1 Stewart’s Place listed building saga since it partially collapsed in July last year resulting in then full and then partial closure of the busy Bangor Road.

Since the partial collapse in July 2016 local businesses, residents and visitors had to endure great inconvenience whilst the building was disgracefully left to deteriorate. Throughout this period I have been relentlessly campaigning for a prompt solution, pushing the Council and other statutory agencies to intervene whilst also pressurising the previous owners to act. Thankfully the new owner has been swift in their response with the building now fully secured and road re-opened only weeks after they purchased the building. I look forward to meeting them in the weeks ahead to discuss developments and the hopefully much brighter future ahead for this historic building.”

Listed in the 1970s, the building is the other part of the ‘Stewart’s Place pair’ and forms part of the Holywood Conservation Area, but unfortunately the property has been on the Built Heritage at Risk Northern Ireland Register for a number of years. It’s other half, No 3 Stewart’s Place was restored by Hearth Housing Association in 1993.

Stewart’s Place is thought to have been built around 1840 by William Lowry, with numbers one and three forming a pair of three-storey stucco houses with rounded corners and were named after the first post-master of Holywood Hugh Stewart.
Email ThisBlogThis!Share to TwitterShare to FacebookShare to Pinterest
Newer Posts Older Posts Home
Subscribe to: Posts (Atom)