Tasting a dram shouldn’t be a drama – Alliance

Councillor Gavin Walker and I are calling for the new Communities Minister to ensure licensing legislation is reformed without delay to enable local Distilleries to offer tasting without fear of prosecution.

Gavin Walker, Councillor for Bangor East and Donaghadee and I both visited the new Copeland Distillery in Donaghadee on 20 February 2020 to hear of concerns from owner Gareth Irvine. 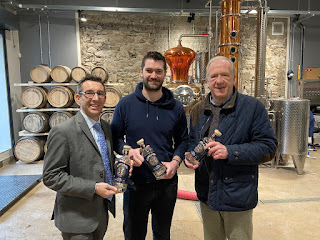 The Copeland Distillery was originally founded by Gareth Irvine in the Summer of 2016 and is a producer of a range of Irish Gin, Single Malt and Pot Still Whiskey.

Whilst it has been great to see Copeland Distillery opening in Donaghadee and enjoying some great success to date it's bonkers that they are not allowed to offer taste tours to visitors at the actually distillery but instead need to take customers to a separate bar. Legislation must be reformed to enable distilleries to sell alcohol on their premises and offer taste tours on-site without having to obtain a liquor licence.

Councillor Gavin Walker stated "Requirement to obtain a Public House Licence involves significant expenditure and a change of use for part of the premises in planning terms. The cost would be prohibitive. It would also mean the Distillery would be competing against existing Public Houses in town. Gareth wants to provide an additional attraction, not a competing one. Reform of our out-dated licencing laws is therefore essential."

Gareth Irvine, owner of Copeland Distillery commented "Whilst we are able to offer tours this involves a short walk to a bar and need to navigate stairs to second floor of an old building. Modern licensing laws would make life much better for Copeland and other Distilleries enabling us to contribute to economic and tourism growth. We join with Hospitality Ulster in calling for change and hope the new Communities Minister can deliver much needed legislative reform in the near future."

Written Question and Answer from Andrew Muir MLA to the Minister for Communities below:

Q: To ask the Minister for Communities whether she plans to revise licensing legislation to enable local producers of beer, cider and spirits to sell their products directly to the public; and, if so, when the legislation will be brought forward.

A: The reform of licensing laws is an Executive priority under the New Decade, New Approach Deal, and is one that I am keen to move forward as soon as possible.

I am currently considering a draft outcome report on the Department's recent consultation on liquor licensing laws, which includes a number of representations from local producers of beer, cider and spirits. I will announce how I intend to proceed in due course.
Email ThisBlogThis!Share to TwitterShare to FacebookShare to Pinterest
Newer Post Older Post Home