If we are to properly promote active lifestyles, there needs to be a change of legislation to help organisers of local sporting events across North Down and beyond.

I met with Infrastructure Minister Nichola Mallon on Monday 9 March 2020 alongside representatives from Athletics Northern Ireland, Triathlon Ireland and the Northern Ireland Sports Forum, to discuss the Roads Miscellaneous Provisions Act (NI) 2010, which permits the closure of roads for the holding of special events. 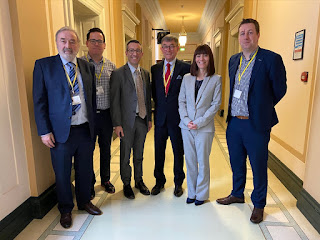 New legislation in 2017 gave local authorities the power to approve such events on roads.

This legislation was pushed through just as the Assembly was collapsing, with many far-reaching negative consequences upon local communities and sporting bodies.

It comes at a time when we are trying to encourage active lifestyles and community participation. However, with devolution now restored, an opportunity now exists to fix this bad law. I was therefore grateful to the Minister for meeting and listening to the issues experienced by the officials from the relevant representative bodies.

I am pleased there are plans to undertake a review with a consultation to gather the views, with an aim to agree a way forward by early autumn. If we are to properly promote active lifestyles, the legislation needs changed and organisers should not be hit with prohibitive costs and rules, resulting in significantly higher entry fees and the cancellation of events.
Email ThisBlogThis!Share to TwitterShare to FacebookShare to Pinterest

You can also listen at http://tiny.cc/rwfzkz

As we prepare to celebrate the fifteenth Anniversary of the Alliance Party’s foundation it’s truly uplifting to see the party full of passionate people of all ages eager to shape a new future for everyone across Northern Ireland.

A new future breaking away from the old divisions and intolerances of the past.

A new future where the blackboard so well presented in Derry Girls is considered a novel reflection of an old forgotten past. For the record, I keep my toaster in the cupboard and hate soup. I never really thought whether you wore a gilet or liked soup was an indication of your religion but in the new Northern Ireland where more and more people are neither Catholic or Protestant the old ways of pigeon holing people just ain’t relevant. 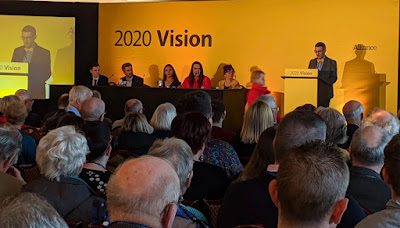 As has been seen in recent elections, it’s increasingly clear that people are throwing aside the orange and green lenses by which nearly everything has previously been viewed and instead opting for clear, bright, sharp lenses which show a new rainbow society of minorities.

Now that the Assembly is back it’s vital we continue the surge towards shaping the new future people demanded and voted for not just once, or twice but three times last year.

No longer can the Assembly be seen as a by word for inaction, intolerance and veto with minority rights denied, difficult decisions deferred and a future focused on the past rather than the hopes and dreams felt today.

The Alliance Party is there to shape a new future for everyone reflecting the change that is already a happening. Fact that this year will feature an historic occasion with Pride Festivals not just occurring in Belfast and Derry~Londonderry but also Newry, Larne, Cookstown, and Fermanagh is just one example of the change occurring in communities shaped by local people and deserving of support. Raising Pride flags or lighting up a building in Rainbow colours to mark such occasions really shouldn’t be such a drag.

That’s why Alliance representatives such as Rachael Ferguson, Sorcha Eastwood, Danny Donnelly and Eóin Tennyson are so important, championing a shared present and pushing for a future resisted by some in other parties but yearned for by the people.

The Militant Moderates, the change makers, the peace builders, the ones delivering today and shaping our future for tomorrow.