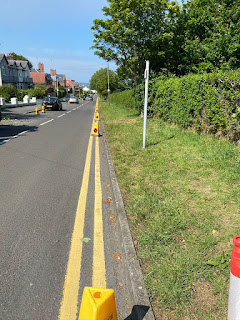 Local Alliance Party representatives have called for the Department for Infrastructure to take action to tackle parking problems being endured by local residents in Helen’s Bay, Seapark and Cultra.

Alliance MLA Andrew Muir and Councillors McRandal and Greer made the call after being inundated with complaints from local householders desperate to see parking restrictions enforced and extended to stop driveways being blocked and roads difficult to travel.

Local Police have temporarily deployed cones in areas and confirmed that whilst in general parking enforcement is not a Police responsibility (other than in cases involving offences such as obstruction and parking within 15 metres of a junction) tickets have been issued. On Monday 15 June 2020 that a total of 53 fixed penalty notices were issued for parking offences from 1 May 2020 to 12 June 2020 at Helen's Bay - Church Road, Grey Point and Fort Road.

North Down Alliance MLA Andrew Muir stated “Easing of lockdown restrictions and recent good weather has seen many people flock to popular destinations such as Helen’s Bay, Seapark and Cultra. The resulting impact upon local residents is however a matter of real concern with driveways blocked and roads made difficult to travel.

Holywood and Clandeboye Alliance Councillor Martin McRandal commented “The right to easily access your home without difficulty is a basic understandable request far too often denied in recent times to people in Helen’s Bay, Seapark and Cultra. Placing Double Yellow Lines along Seapark Road would help enormously and should be actioned by the Department for Infrastructure without delay alongside better enforcement by authorities. The placement of a few cones isn’t enough.”

Gillian Greer, Alliance Councillor for Holywood and Clandeboye Electoral Area also remarked “Seeing cars parked across driveways, on verges, double yellow lines, pavements and right up Church Road to Helen’s Bay Square is a matter of concern which must be addressed whether by Parking Attendants or Police, where relevant. I would also urge people not to come in the volumes experienced thus far to visit beaches and beauty spots as the numbers is overwhelming local neighbourhoods”