Muir calls for assistance to local businesses Excluded from support 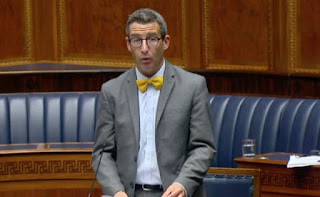 North Down Alliance MLA Andrew Muir spoke in the Assembly on Tuesday 15 September 2020 in support of calls to provide much needed assistance to local businesses excluded from grant assistance.

Quoting some examples of businesses in need, Andrew Muir MLA stated “From the very start of this crisis I have been in regular contact with businesses in my constituency that have been left in utter despair”

Andrew Muir MLA also remarked “I have so many examples of businesses in North Down and beyond who were not eligible for business support grants because of so many reasons, whether it be their business rates were over the NAV thresholds (some very marginally by just a pound), company directors with no PAYE employees who could not apply for the Hardship Fund,  Bed and Breakfast owners or those who didn’t operate out of fixed property who couldn’t apply for grants based on rateable value, and newly-self employed entrepreneurs who did not meet the criteria for UK Self Employed Support Scheme.”

Concluding his remarks in the Assembly Andrew Muir MLA stated “It is long beyond time that the Minister for the Economy should have brought forward a hardship scheme for businesses that have been excluded from existing support packages. I have written to her on numerous occasions about the issues that have arisen in the debate. Unfortunately, I eventually received only generic responses, offering little more than tea and sympathy. Minister, the time for tea and sympathy is up. The time for action is now.