Muir shocked at lack of Parking Enforcement in problem hotspots 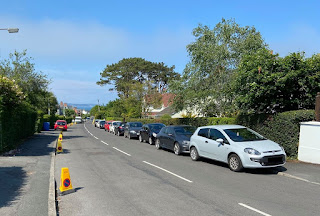 North Down Alliance MLA Andrew Muir has expressed shock over the lack of parking enforcement in popular North Down day tripping areas after receiving figures from the Department for Infrastructure detailing the number of parking ticket notices issued in Seapark, Helen’s Bay and near Crawfordsburn Country Park.

“As a result of the much better weather earlier this year I was inundated with complaints from the public concerning parking issues across North Down. Many people mentioned the lack of enforcement of double yellow lines as a big cause for concern. During peak times busy spots become inundated with visitors and this can lead to problems with cars parked on double yellow lines causing obstructions to residents trying to access their homes and making it hard for those with a disability or parents pushing a pram to safely travel along the pavement, instead forcing them to walk on the road.

In light of this I asked the Minister for Infrastructure to detail the number of parking ticket notices issued in the past three years at Seapark in Holywood, Bridge Road South near Crawfordsburn Country Park and Church Road and Fort Road in Helen’s Bay. I was shocked to see Church Road in Helen’s Bay was the only location to have had some notices issued. Even where action occurred this was only during four months over the past three years.

The Department for Infrastructure must do better! Resources should be better managed with Parking Attendants deployed at problem hotspots when issues can be easily anticipated as the sun shines and people seek to visit popular locations to enjoy the weather. As we struggle through the dark nights of Winter it’s important to remember that brighter, warmer days are ahead with identical problems likely to occur at exactly the same locations over the Summer of 2021 unless the Department for Infrastructure gets it’s act into gear.”