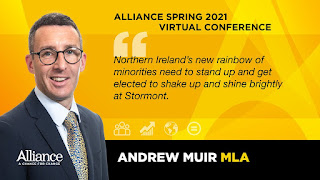 In approaching today’s debate I watched the documentary as part of the Imagine! Annual Festival of Ideas and Politics about the painting which now hangs in the Senate Chamber named ‘The House will divide' recording all the members of the first Assembly elected in 1998.

Filmed in 2002 just as the Assembly fell, once again, looking back it is not hard to acknowledge how things have changed, for good or ill.  Northern Ireland is a vastly different and diverse place. Bob McCartney is gone, Alliance are much bigger and the Ulster Unionists now the fifth largest party.

But, nearly twenty three years on from the Good Friday Agreement and nineteen from the documentary the people of Northern Ireland deserve better than an Assembly that has entirely failed to progress any substantive social change since foundation.

Such issues have just either been blocked, vetoed, deferred or defeated for decades.

I’m proud to serve as an Alliance MLA in the Assembly and have worked hard for the people of North Down over the last year dealing with over nine hundreds individual issues, responding to legislation, working to get support to businesses, improved investment in Active Travel, a better Planning System and pushing for government to get real about tackling the Cost of Division but if devolution is really to succeed it must deliver progress not deadlock, dither and the need to defer to others when it’s determined too difficult to deal with.

Far too often my LGBT brothers and sisters, women and others have had to wait for Stormont to fall and power to pass to Westminster for change to happen.

But as Harvey Milk said “Rights are won only by those who make their voices heard.” The duty to deliver change rests on progressives to put themselves forward and get elected or help push others across the line.

It cannot be right that John Blair and I are the only gays in the Assembly nor that females are so poorly represented.

With the old certainties of the past now cast aside, now is the Chance for Change.

An awful lot has changed since 1998 but little in terms of the rigid structures of the Assembly which just solidify separation.

We ought to be the first, not the last, UK nation to ban Conversion Therapy, leading the way, not brought kicking and screaming.

But this won’t happen unless Alliance continues to surge ahead and turning polling statistics into more votes and more representatives.

I am confident we can do that with courage and determination. Alan Turing, a personal hero of mine, once said “We can only see a short distance ahead, but we can see plenty there that needs to be done.”

Let’s get done and grasp the Chance for Change. 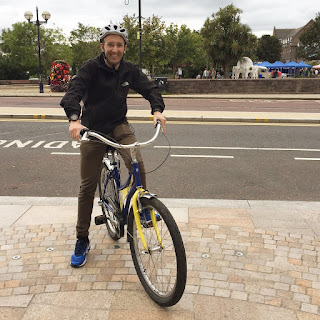 North Down Alliance MLA and Alliance Party Infrastructure and Finance Spokesperson Andrew Muir MLA raised the need to invest in new Active Travel initiatives in North Down with the Infrastructure Minister Nichola Mallon MLA at Stormont on Monday 22 March 2021.

The keen runner, cyclist and Alliance MLA wants to see an Active Travel Hub established in Bangor similar to the successful operation already in place at C.S. Lewis Square in East Belfast alongside investment in the One Path initiative to better enable respectful shared use of the North Down Coastal Path.

Commenting on the issue, Andrew Muir MLA stated “With just £22,500 due to be spent this year on Active Travel within North Down it’s essential the Infrastructure Minister cuts us a bigger slice of cake both in terms of day to day resource spending and one off capital projects.

Whilst Greenway Capital Investment Plans are being progressed the complete lack of day to day resource spending on Active Travel initiatives must end. Only by ploughing money in new innovative measures will we achieve the Green Recovery needed.

With the Active Travel Hub in C.S. Lewis Square proving to be a roaring success acting as a real hub for cyclists and great way to better encourage Active Travel action must be swiftly taken to introduce something similar in Bangor encouraging people to make the journey into and around the Town by two as opposed to four wheels.

Already rolled out along the Comber Greenway, the One Path initiative has also proven to be a good way to tackle conflict and encourage good respectful relations along busy paths used by walkers, runners, cyclists and more. With the numbers using the North Down Coastal Path at an all-time high in light of the pandemic it’s essential the Department for Infrastructure fully fund the introduction of the One Path initiative and help us together encourage shared, safe and respectful use of the jewel in North Down’s crown.” 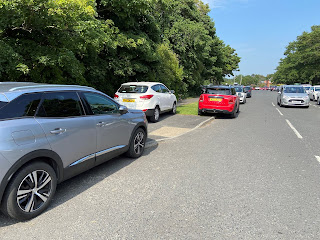 North Down Alliance MLA Andrew Muir is requesting a meeting with the Infrastructure Minister Nichola Mallon MLA after ever increasing issues concerning parking problems close to local Beaches and Beauty spots such as Helen’s Bay, Crawfordsburn and Seapark in Holywood.

Concerns have also been expressed about a seemingly large beach party on Saturday 6 March in Helen’s Bay with swimmers experiencing lumps of burnt wood and charcoal the following morning plus broken bottles and litter on the beach.

Commenting on the issue, Andrew Muir MLA stated “As Northern Ireland emerges from Winter into Spring with weather improving and more people seeking to exercise and enjoy the outdoors in the context of COVID-19 an increase in visitors is being experienced at many Beaches and Beauty Spots.

Unfortunately, whilst the vast majority people are considerate of others, some motorists are causing misery for local residents abandoning cars regardless of the impact upon others with parking restrictions ignored, driveways blocked and pedestrians pushed onto the road as a result of pavement parking.

There’s real frustration from local residents at the lack of enforcement both by the Department for Infrastructure and Police which I have previously raised in formal correspondence to the Infrastructure Minister but without success hence why I feel the real and urgent need to meet. At my meeting with the Minister I hope to outline the range of issues and seek better attention by red coat parking attendants to problem areas in the context of the woefully low number of tickets issued in recent times.

I met with the local Police Commander on Thursday 4 March with my Alliance colleagues Dr Stephen Farry MP, Councillors Gillian Greer and Connie Egan and, whilst promises of increased action to deal with parking obstructing driveways and pavements are welcome there’s a real need for this to be matched with action and better and faster responses to issues, such as the events on Saturday night.”

Concluding, Andrew Muir MLA stated “I have also raised concerns with the Council concerning areas under their control, the Environment Minister with regards to Crawfordsburn Country Park and the Infrastructure Minister concerning Bus and Rail services. I am presently seeking a follow-up meeting with Translink to explore what more can be done to stop problem whereby hundreds are conveyed on hot summer days to areas such as Helen’s Bay with resulting problems throughout the day and into the night as people seek to return home.

2020 was a year associated with a number of high profile problems for local people as a result of the influx of visitors. 2021 cannot be like ground hog day, things must change via a combination of better personal responsibility and improved response from statutory bodies”.