A group of Alliance Councillors and MLAs met with the Minister for Infrastructure, Nichola Mallon MLA on Wednesday 24 March 2021 to discuss the recently announced plans regarding the proposed Tillysburn Park and Ride and the Sydenham Greenway. 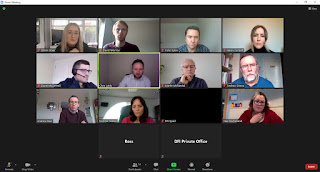 The meeting was attended by a selection of representatives from East Belfast and North Down, including East Belfast MLA Chris Lyttle, North Down MLA Andrew Muir, Holywood and Clandeboye Councillors Gillian Greer and Martin McRandal plus East Belfast Councillors Ross McMullan and Sian Mulholland.

The representatives raised concerns regarding the impact on traffic and road safety at the proposed Tillysburn site especially in terms of entrance and exit but welcomed news on planned entrance from the A2 Sydenham Bypass City bound lane.

With regards to the Sydenham Greenway, representatives called for the new cycling infrastructure to be fully segregated, and off-road to the greatest extent possible.  The Minister agreed that there should be further consultation with stakeholders prior to the proposed schemes being developed.

Commenting on the engagement, Chris Lyttle MLA stated “With previous plans for a Park and Ride site at Tillysburn attracting lots of feedback and concern about the impact upon an already very busy and hazardous junction it’s important finalised arrangements address these worries ensure safe and efficient entrance and exit. The Greenway linking Victoria Park to Holywood must also be built to a standard that will attract users with segregation and safety a top priority”

Speaking after the meeting, Andrew Muir MLA said “I’m very grateful to the Minister for attending to engage with local representatives.  Investment in further Park and Rides and Greenways that will serve the people of North Down are very welcome as we look to further facilitate people to choose Active Travel and Public Transport.

We now need to make sure that the proposed developments are attractive for people to use, and don’t have any negative impacts on the local area. I look forward to seeing the various options proposed for the Greenway and making a full response to ensure its fit for purpose and ideally aligned with those proposed by NI Greenways”.