Alliance North Down MLA Andrew Muir has raised the issue of Utility Companies failing to reinstate roads and footpaths to an adequate standard during a meeting of the Infrastructure Committee at Stormont last week (Wednesday 26 may 2021) with current situation described as a ‘dog’s dinner’.

Commenting on the issue Mr Muir said “I continue to receive a huge amount of complaints from residents all over North Down reporting that roads and footpaths outside their homes have been left as a botched patchwork of tarmac following works by utilities companies. I appreciate that this work is vital in providing basic services to many homes but the standard of re-instatements is often woeful.

Correspondence I recently received from the Department outlined that Utility companies have a legal right to place and maintain their services in the footway and carriageway but have to adhere to a certain standard of re-instatement when doing so. When footpaths already have a number of cracked and broken flags the use of bitumen is permitted but this should only be allowed if the area is imminently due for resurfacing works by the Department. 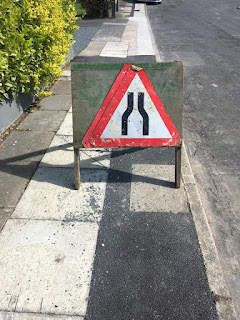 In some cases works are done to newly resurfaced roads or footpaths which seems completely madness.  Better communication and co-ordination between the Utilities companies and the Department for Infrastructure is essential alongside much higher standard of work. It’s clear there needs to be a tightening of the procedures and standards for the work completed as well as a higher level of follow up inspections and enforcement around this from the Department. The current situation is best described as dog’s dinner! The Committee unanimously agreed to write to the Infrastructure Minister around this and I will be following up on her response once received.”