Muir speaks out against Conversion Therapy

Alliance MLA for North Down Andrew Muir has spoken out in favour of a ban on Conversion Therapy in a Northern Ireland Assembly debate on Tuesday 20 April 2021. 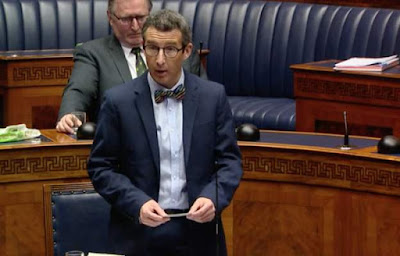 Mr Muir served as the first openly gay Mayor in Northern Ireland in 2013/14, and is one of only two openly gay MLAs at Stormont.  In the debate on Tuesday, Mr Muir spoke passionately about the deeply damaging impact that conversion therapy has had with some of his own LGBT friends taking their lives due to the deep rooted and endemic homophobia in society.

Speaking after the debate, Mr Muir said “So called “Conversion Therapy” is an extremely harmful practice that can cause lasting psychological damage to those who go through it.  Today, the Assembly sent out a clear message: being LGBT is not something that can be “cured”.  There is nothing wrong with being LGBT, and we should celebrate people for who we are rather than trying to change them”.

Note to editors – Hansard of debate below, photo of Andrew Muir MLA speaking in debate attached.

Mr Muir: To start, I thank Doug and John for tabling today's motion. I know them as allies of the LGBT community, alongside others in the Chamber such as Carál Ní Chuilín, whom I have known for many years and who supported me when I was much younger and less grey-haired as an LGBT activist. I really appreciate them tabling today's motion, and I appreciate the work that so many have done, including my colleague Paula Bradshaw. I also thank, in particular, those who have been involved in a very successful, professional and well-organised campaign. I am impressed by the work that has been done. I speak as an Alliance Party MLA on behalf of the party. I am conscious of the need for a respectful debate, because people are watching, and the way that the debate plays out has impacts.

On Saturday, I was sorting out the books in my study, having got new shelves from a well-known furniture retailer. I found one of my books — 'Boy Erased' — which was given to me as a gift by one of my best friends, who was able to come to terms with his sexuality and with his friends and family in relation to that. I strongly recommend the book in relation to today's debate. Alongside the book, I found a postcard that was given to me in the late 1990s when I was at university in Derry. Things have moved on somewhat from then. At the top, it says, "Lesbians and gay men are". Well, we have moved on to be more inclusive than that, as the LGBT community. The postcard says that they are our daughters, sons, mothers, fathers, sisters, brothers, cousins, grandparents, uncles, aunts, in-laws, carers, cared-for, friends, work colleagues, customers and service users. That is whom we are talking about today. The issue that we are debating has a significant impact on so many people: not just my LGBT brothers and sisters but their wider families, friends and work colleagues.

I am very fortunate to have had a very inclusive upbringing, a very supportive family and a mother who is probably more liberal than I am, but I am conscious of those who have not and of the impact of this debate on them, particularly the DUP amendment tabled on Friday. That amendment has caused hurt and offence, and people have contacted me saying that they have been re-traumatised by it, particularly the desire to remove the wording about a "fix or cure". I really regret that that has happened.

Ms Armstrong: I thank the Member for giving way. Does the Member agree that it has been heartbreaking to hear, over the last week or so, from people who have been so traumatised by the amendment? It has traumatised a vast part of the community, which did not expect this to happen.

Mr Speaker: The Member has an extra minute.

Mr Muir: Thank you, Mr Speaker. I agree with Ms Armstrong. All the amendment does is harm. The DUP needs to recognise that it is on the wrong side of history on this. The debate that we have had in recent days about the amendment has shown that society has moved on quite a lot. The idea that a ban on conversion therapy can be an attack on religious freedom is building a straw man. Any legislation that is passed by this place would have to be compliant with the European Convention on Human Rights, especially article 9. I am used to these straw men being built, especially in relation to equal marriage. We were told that the sky would fall in if we legislated for equal marriage. The reality is that people are a bit more equal and are happier in love. The sky has not fallen in.

For me, when we are debating conversion therapy, it touches the core of what is deep-rooted homophobia in our society. There is an idea that sexuality is a choice and a lifestyle. I chose to wear a bow tie today. That is a lifestyle choice; my sexuality is not. It also goes to the core of deep-rooted transphobia in our society. The reality is that it is perfectly good and normal for one man to love another man, for one woman to love another woman or for someone to fulfil their gender identity. The failure to recognise and accept that shows why we need an effective ban. We need that ban. This must not be symbolic legislation. That would be an insult and would allow the harm to continue.

A definition of conversion therapy is essential to allow that effective ban, and the Ban Conversion Therapy coalition of LGBT+ organisations has provided a recommended legal definition, which is about actions to encourage someone to erase, repress or change their sexuality or gender identity. Asking someone to repress, for example, their sexual orientation is deeply harmful. I know people to whom it has happened. I know people who suffered from the homophobia and transphobia in our society to such an extent that they took their life. We have a responsibility in this place to ensure that an effective ban is brought forward. Yes, it must be done through co-production and co-design with the LGBT community, but this Assembly mandate must end with an effective ban.