Local Alliance Representatives and residents have called for Ards and North Down Borough Council to clarify whether McCutcheon's Lane, which runs between Ballymiscaw Road and Whinney Hill in Craigantlet, has been asserted as a Right of Way.

Commenting on the issue North Down Alliance MLA Andrew Muir said "We were contacted around this issue last year by residents concerned following the erection of gates blocking the path between Ballymiscaw Road and Whinney Hill. This lane is known locally as McCutcheon's Lane or "Pig Lane" and has been enjoyed by local walkers and Horse riders for decades.

Public Rights of Way are public highways that are legally protected in the same way as roads which means any member of the public can use them as a right - not a privilege granted by the landowner. These exist as a permanent legal entity and remain in existence unless and until the path is extinguished or diverted by due legal process. 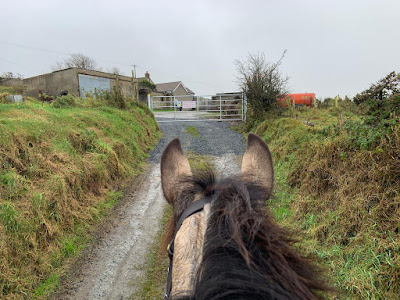 We have been seeking confirmation from the Council that the Lane had been asserted officially as a Right of Way in order that access could be reinstated. Previous correspondence from the Council in 2010 seemingly confirmed that the path in question had in fact been asserted but now it appears they don't have or cannot find the corresponding records meaning an investigation file may have to be opened and the whole process started again.

It is worrying that records are not being kept and raises questions over how many of our Rights of Way may be under threat. It is the Council's responsibility to assert, protect and keep open any public Rights of Way and ensure maps and records are sufficiently preserved. We would welcome confirmation from the Council as to what the current status of the investigation is."

Karen Stewart Gay is a local resident and Rights of Way Officer for The Ulster Rural Riders Association and commented "McCutcheon's Lane has been used by Riders and walkers for at least fifty years or more. I first rode along it when I was twelve. It was one of the first rights of way to be asserted by the Ulster Rural Riders. This organisation was formed in 1988 to protect rights of way and to retain safe places for Riders and walkers. As there are not any bridle ways in N. Ireland it is vital that our ancient rights of way are not lost. It is within the Council's remit to ensure access to these is not inhibited."

Helen McFarland, a solicitor living in the area added "As a local walker and horse rider, I have been using this lane for many years and always understood it was a right of way between Creighton's Green Road and Ballymiscaw Road. It's most disappointing to have access denied recently by locked gates across the path."

Holywood and Clandeboye Alliance Councillor Gillian Greer said "Given North Down is so rich in natural beauty there is a popular culture of walking and horse riding meaning these Rights of Way are particularly important to local life here. Whilst I recognise that record keeping has changed over the years and Covid-19 restrictions have had an impact on staff attending the workplace, I would welcome confirmation from the Council that they have clear procedures and record keeping systems established to ensure our Rights of Way are being protected."