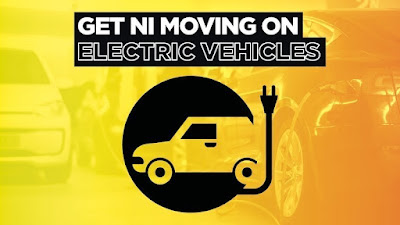 The online petition, launched on Tuesday morning, notes that while Northern Ireland’s EV charging network was world-leading when it was established back in 2010, a decade of decay and under-investment have seen it fall to being the worst network of any region in the UK and Ireland.  The petition calls on the Minister for Infrastructure to set out a comprehensive and detailed strategy for the rapid improvement of the public EV charging network, and will be presented to the Minister when the Northern Ireland Assembly returns from recess in September.

Mr Muir said “Northern Ireland’s EV charging network is a shambles.  At a time when we need to be encouraging people to switch to EVs to tackle the climate emergency, the awful state of our current charging network means that people who previously had bought an EV are considering switching back to petrol or diesel cars.”

“I speak to constituents in North Down all the time who would like to switch to an EV, but worry that they won’t be able to charge their vehicles when they need to.  For those who regularly take long journeys for work or to see family, the lack of a reliable charging network across Northern Ireland is the major issue.  For those without a driveway, the lack of on-street or at work charge points makes EV ownership almost impossible. In addition to the charging network, the Alliance Party’s Green New Deal has called for interest free loans which could be used on top of existing grants to encourage people to go electric.”

“The Department for Infrastructure cannot wash its hands of this issue, and there has been a real lack of progress since the Assembly was restored in January 2020.  The Minister urgently needs to bring forward and comprehensive and detailed strategy that will bring the public and the private sector to work together to build a fit-for-purpose, on-street EV charging network.  This petition will send a strong statement to the Minister, and I urge people to sign it.”