Muir and Egan welcome 20mph Schemes for North Down Schools 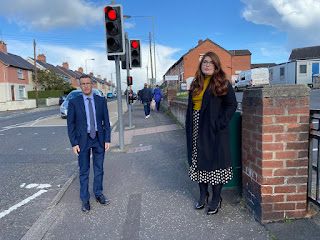 Commenting on the development, Andrew Muir MLA stated “After lots of campaigning by many people, including Schools, Councillor Egan and I, it’s great news a number of North Down Schools will receive these schemes at long last. The tenacity and determination of so many to get schemes is to be commended. North Down was overlooked in the first roll-out to much legitimate annoyance but thankfully progress is now on the horizon.

I would urge the Department to both swiftly roll these schemes out and urgently consider requests for a third roll out including the numerous schools still in need of temporary 20mph restrictions. Many Principals, teachers and parents have continued to contact me urging that  the Department for Infrastructure rolls the 20mph scheme to their school. Such key road safety measure should really be the norm!”

Councillor Connie Egan also commented “After campaigning for action, including at Clandeboye Primary School last year, it’s fantastic to see progress with positive announcement now forthcoming. The safety of everyone using our roads, especially those attending school, must be of paramount concern. Those still overlooked must not be forgotten and included in a much needed third round of roll out to ensure every school who wants such a scheme gets it”.