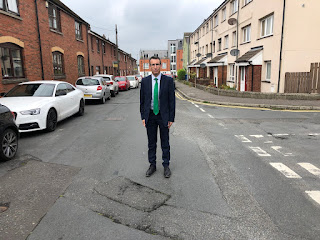 North Down Alliance MLA Andrew Muir has stated his disbelief over the Department for Infrastructure's refusal to resurface the roads and footways along Spencer Street in Holywood. The busy street has been in poor repair for years and a heavy volume of traffic has left more recent repair work in tatters.

Commenting on the issue Mr Muir said "I raised this with the Department back in 2019 and the request was refused but I was more hopeful that we would get a more positive response this time around given the shocking state of the surfaces along this stretch. Holywood Primary School is at the top of the street and this generates a huge amount of traffic with parents picking up and dropping of their children, large HGV lorries also go up and down the narrow street putting even further pressure on the already crumbling road surface."

"I was shocked to receive a response stating that although Spencer Street is on the Department's to-do list it is not on the current works programme meaning it is unlikely to be carried out this financial year. Following this response I went back to the Department to ask them if they could provide information on when the street was last resurfaced and statistics on recent traffic intensity. I was bemused when they came back to say that they do not hold historic records of when roads were resurfaced or any recent traffic counts for this stretch of road. I have tabled a formal question to the Minister for Infrastructure in light of this to ascertain what, if any records her Department holds in relation to historical road maintenance and resurfacing. It is impossible for the Department to efficiently keep on top of routine road maintenance without accurate records on when work was last completed and I eagerly await the Minister's response."

"As so many people are aware there is a huge backlog of similar works to be carried out across North Down. I have consistently called on the Infrastructure Minister to prioritise funding and delivery of road resurfacing projects. We need to get the basics right in the first instance and this involves delivering safe usable roads and footpaths for everyone."