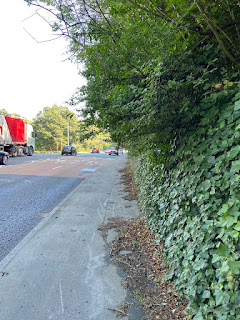 Alliance North Down MLA Andrew Muir has raised safety concerns arising from the atrocious nature of the footpath along the A2 Bangor to Belfast Road.

The overhanging trees and bushes, particularly between Seahill and Whinney Hill, obstruct a significant portion of the footpath alongside the Belfast-bound A2.  The path is frequently used by pedestrians and, due to the lack of safe, segregated infrastructure, cyclists. It runs alongside the busy A2 which has a 50mph speed limit. Mr Muir raised the issue with Department for Infrastructure and local council last year, and has since re-raised it as no action was taken.

Mr Muir said “It is really disappointing that since I originally contacted the responsible authorities about the issue, access along this stretch of pavement has continued to deteriorate.  This presents a serious danger to the safety of people using the footpath, and those responsible must treat it with the seriousness it deserves”.

“This stretch of the A2 is one of the busiest roads in the whole county, with cars and HGVs flying past at up to 50mph. For that reason, it needs to be totally clear of obstructing trees and bushes.  Furthermore, in the autumn and winter, this path is frequently covered in leaves, increasing the issue of someone slipping  onto the busy road.”

“I want the department and the council to work with the relevant landowners and act on this urgently.  I dread to think what could happen if someone accidentally falls or slips due to the poor condition of the footpath.  The authorities must do everything they can to prevent this from happening”