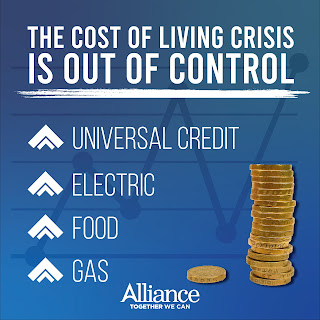 With the Cost of Living Crisis hitting homes hard North Down Alliance MP Stephen Farry and MLA Andrew Muir have set out a range of actions that should be taken to help people struggling to meet rising bills with ever increasing energy costs proving crippling for so many.

The Westminster and Stormont representatives have urged the UK Government to intervene coupled with a restored Northern Ireland Executive to lead on delivery of range of immediate initiatives to assist households.

North Down Alliance MLA and Party Finance Spokesperson Andrew Muir commented “With countless people across North Down and beyond struggling to make ends meet we need an Executive in Northern Ireland to deliver assistance desperately required to help relieve the pain being felt by many.

The invasion of Ukraine by Russian forces at the behest of Vladimir Putin is resulting in horrendous loss of life, need for a full and generous humanitarian response and further worsening the Cost of Living pressures felt by millions of homes across Europe and beyond making the need for an urgent response even more critical.

A range of initiatives should be taken locally in Northern Ireland to help families and individuals faced with rocketing household bills. A Home Heating Support Grant to supplement both the Winter Fuel Payment scheme and recent Energy Payment Support Scheme should be delivered utilising some of the £300million sitting idle due to the lack of an Executive. Assistance of HMRC is crucial to ensure it is targeted not just at those in receipt of benefits but also low income households, who are suffering a massive impact from rising energy costs. 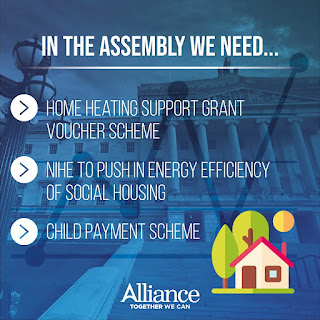 A Child Payment Scheme to protect children in already vulnerable circumstances should also be launched providing a per child weekly payment for any family with children in receipt of Free School Meals plus for pre-school age children in low income households.

With the highest percentage of homes using heating oil in Western Europe Home Heating Oil should be brought within the remit of the Utility Regulatory, ensuring price transparency for consumers, bringing this market in line with gas and electricity.

A much more ambitious, generous and faster roll out of energy efficiency grant schemes must also take place with attic and cavity wall installation more widely available to reduce household energy use alongside investment in renewable energy sources of the future including Hydrogen” 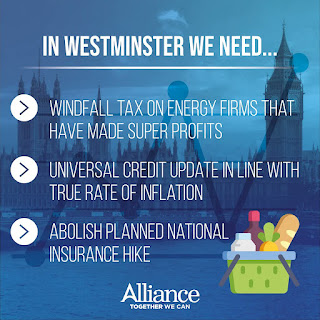 "Current Government plans are for Universal Credit and other benefits are to rise at 3.1% in April. But this was the inflation rate last September.  However, inflation is forecasted to hit between 6-7%. The Joseph Rowntree Foundation anticipates that, based on the Government’s current plans, nine million low-income families, both in work and out of work, would experience a real terms cut of £500 a year, while pensioner couples would lose £540 a year. This is in addition to the recent cut to incomes of households on universal credit, when the £20 a week top-up was withdrawn.

“Furthermore, the National Insurance hike that was announced by the Government is a regressive tax. It wasn't justified then, and is really challenging now.

"I have written to the Chancellor ahead of the Spring Financial Statement asking for both of these to be reconsidered in light of the Ukraine crisis and the much greater cost of living crisis.”