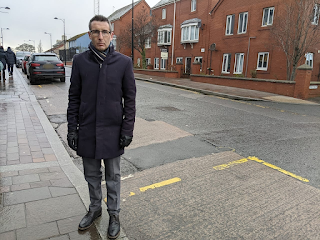 Alliance Infrastructure Spokesperson Andrew Muir has expressed his frustration at seemingly endless circle of delays to resurface key roads across North Down by the Department for Infrastructure.

Pointing to just one example, the Department for Infrastructure (DfI) Roads Division listed Holywood Hight Street for inclusion in its 2021/22 report to Ards and North Down Borough Council which was welcome news to the many businesses and residents who use this busy road on a daily basis. After no progress Mr Muir recently contacted DfI to check for an update on when works may begin at this and a number of other locations.

Mr Muir stated, “The upper end of Holywood High Street near the Police Station has been in a poor state of repair for many years now with many businesses, visitors and local residents driving through Holywood every day.

After pushing for the road to be resurfaced I was delighted to see it listed to be done during the 2021/22 financial year but with the end of this financial year rapidly approaching I contacted the Infrastructure Minister to confirm when the resurfacing would be commencing at this and other spots.

The response received was astounding detailing that plans had changed and there would now be design works commissioned to complete asphalt resurfacing as opposed to concrete resurfacing and that the Department was now “hopeful” this would be included in the 2022/23 works programme.

It’s massively disappointing that after waiting so long for this work to be scheduled it turns out it’s delayed yet again. The Department seem to be failing to complete even the modest works scheduled and this is why we’re seeing such a continuous decline in the standard of our road network.

In the last financial year even with a budget confirmed it took many months before the Department confirmed their planned works in Autumn 2021. Now without a budget we are being told nothing can be confirmed. I would urge the Department not to sit on its hands but do all it can to deliver indicative plans for works to be completed over the next twelve months bringing a halt to this seemingly endless circle of resurfacing delays. So many areas need action now, whether it be Holywood High Street, Bridge Road South, Crawfordsburn, Groomsport Road in Bangor and the list goes on and on and on."