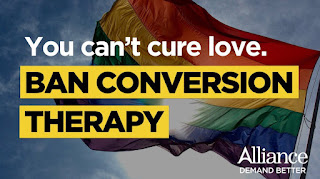 Alliance Chief Whip and North Down representative Andrew Muir has pledged to bring forward a Private Members Bill to Ban Conversion Therapy if returned to the Assembly and delays from the Department for Communities continue. The MLA recently asked the Communities Minister to outline reasons for delay in bringing forward proposals to ban Conversion Therapy and was informed of a myriad of reasons why no progress has been made.

Commenting on the matter, Andrew Muir stated “Conversion Therapy is deeply harmful which must be outlawed without delay but nearly a year after the Assembly voted in favour of a Ban I am bitterly disappointed the Assembly mandate ended without even a consultation being commenced on legislative proposals to criminalise these harmful practices.

The fact that a dedicated staff resource to take forward a ban was only put in place from January 2022 just adds to concern that the focus and priority given to this does not match the urgency needed to end the harm being perpetrated.

U-turns, chaos and confusion from the UK Government is just adding to the feeling of despair with action in England & Wales delayed or denied and trans people likely to be subject to yet more discrimination as a regular of planned exclusion.

If the delays from the Department for Communities in Northern Ireland continue and I am elected back to the Assembly on 5 May it would be my intention to consult upon my own Private Members Bill to Ban Conversion Therapy. We cannot continue to postpone action to stop the harm being inflicted upon LGBTQI+ people. We’ve travelled a long way along the road towards a truly inclusive and equal future for LGBTQI+ people but there’s much more that needs done right now. We cannot afford to wait a day longer to Ban Conversion Therapy and end the harm done”